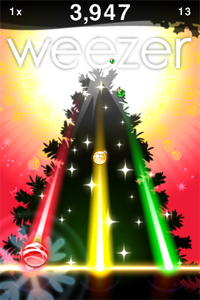 iPhone development house Tapulous has announced two new premium versions of its mega-hit Tap Tap Revenge, both of which feature licensed music (still a rarity on the fledgling platform). Tap Tap Revenge is an intuitive, addictive game in the same vein as Guitar Hero, allowing users to ‘play’ their songs by tapping and shaking their phones. The game was recently declared to be the all-time most popular game on the iPhone App Store, and is showing no signs of slowing down.

The first version, which will be available tonight, is a Dance-oriented edition of the game with tracks from well known DJs including Moby, Daft Punk, Tiesto, and The Chemical Brothers. Tap Tap Dance also introduces a new OpenGL graphics engine as well as some new gameplay elements like ‘multi taps’ and ‘tap-and-hold’.

Tapulous has also announced a Weezer-branded version of the game called Christmas With Weezer, which will appear on the store some time in the next 48 hours. CEO Bart Decrem says that Weezer actually recorded six Christmas songs exclusively for the game which are not currently available for download anywhere else (the game also includes a pair of previously released songs). This sets a major precedent for releasing new material through the iPhone – something that has been done in other games (Guns N’ Roses debuted a song on Rock Band 2) but never before on the iPhone platform. Christmas With Weezer also features the new game engine.

Tapulous started the trend of using licensed music in iPhone applications with its release of a Nine Inch Nails edition in September, and while some artists have tried to market their own applications independently, Decrem says that the Tap Tap Revenge applications are seeing download numbers orders of magnitude larger that its competitors.

Decrem also says that the original version of Tap Tap Revenge will continue to see updates and will stay free (the new premium versions are $4.99 each). The original game continues to frequently add new music options, and recently introduced a free download of a Q-Tip track that saw over 260,000 downloads in six days.