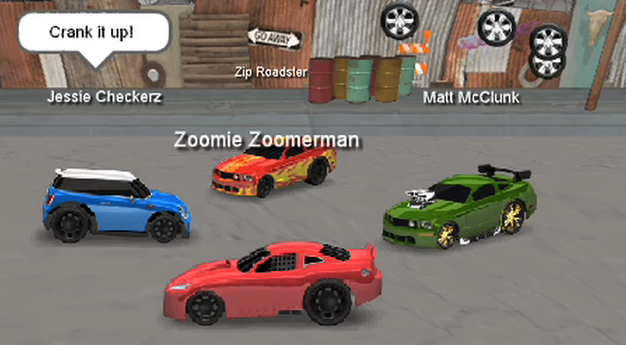 Larry Andreini thinks he can take on Pixar. The founder and CEO of Ridemakerz, a rapidly growing chain of stores where boys can custom-build their own toy cars, is building a virtual world for his 6-to-12-year-old customers and their cars. This virtual world is in closed beta right now, and will launch early next year. So will Pixar’s World of Cars and startup Webcarzz (here’s some good background).

There is a gap on the Web between Webkinz and Club Penguin and the more adult social networks of MySpace, Facebook and beyond, particularly for boys. Other than Pirates of the Carribean Online, there is not much out there yet. Andreini wants to parlay the loyalty of his customers into a virtual world where they can design and play with the exact same cars they can buy in his stores. Making that connection between the virtual and the real, even if it’s just a toy, is where he thinks he’ll have a leg up on the competition. The virtual world he is building is also pretty advanced and goes way beyond being a slick brochure for his products, although it is that as well. Kids don’t have to buy a car to play in the virtual world, but the experience is better if they do.

The Ridemakerz virtual world is being designed by the Electric Sheep Company, which has a lot of experience designing virtual experiences for corporate clients in Second Life. But this virtual world will be entirely browser-based, built on top of its Webflock technology platform (which I wrote about in July). I was given a preview of the virtual world last week.

Before I get into the virtual world, it helps to understand the experience in a Ridemakerz retail store. Boys come in and pick one of 70 different car body types and paint schemes. These are scale plastic-mold replicas of real-world cars that Ridemakerz licenses from GM, Ford, BMW, and other car companies. Then the boy tricks out his ride by picking the wheels, hubcaps, a chassis, sounds, and other options. He takes all the parts to a pit and then builds his car right there in the store, and then his mom or dad pays for it. A basic model costs only $27.50, but the options add up and a single car with radio control can cost $120.

Andreini opened his first store in June, 2007, and now there are a dozen across the country. His first store in Myrtle Beach, SC hit $1 million in sales 87 days after it launched. This year, that same store hit $1 million in sales 53 days after June 1. He’s raised $23 million to date from Norm Pozez, whose father founded Payless Shoes, and Build-A-Bear Workshop. Build-A-Bear, which operates a retail chain with a similar concept around building teddy bears, is also a strategic operational partner.

Ridemakerz offers online sales on its Website right now, but they are pretty minimal. Andrieni estimates the e-commerce business will bring in about $250,000 this year. But he plans to invest $3 million to $4 million a year in his new virtual world. He predicts:

I think the virtual experience is going to dwarf our real-world experience.

The virtual world is a combination of a social network, video games, and a complex inventory system. Boys can design their own virtual cars online just like they can in the store. Electric Sheep took CAD files of all the body designs and measured all the parts with micrometers to render how each car looks. Then they converted that into Flash using 3D Studio Max and Papervision3D. There are 649 million different combinations, and each one can be made into a real car and bought, so Electric Sheep had to figure out a way to make sure that only parts that really fit together could be created virtually. Depending on what parts a boy picks, it will affect the performance of his ride.

Alternatively, a child who buys a car at a store can enter the unique Ridez Identification Number (RIN) number printed on each one at checkout and he will get a virtual replica of that exact design. So he can play with the same car at home and online.

Inside the virtual world, each child’s avatar is his car. He can drive around and see the cars of other members who are online. There is no text chatting (for child safety reasons), but each car has different “Zmotes” that get cooler the more points that are acquired. The Zmotes start with things like puffs and smiley faces and graduate to explosions and lightening bolts. The roads in the virtual world lead to different activities, including a junkyard crane video game and a pitstop crew game that teaches time management.

We are trying to take the best parts of virtual worlds, MMOs, kids worlds , and bring that out on the Web.

Once Ridemkarz launches this basic version, it can keep adding activities and destinations inside the virtual world. There are already plans for user-generated content, such as letting boys design their own race courses and then race their virtual cars on them. In the future, boys also may be able to create their own outlandish designs that won’t necessarily be buildable.

It is an ambitious effort from an unlikely startup. Can they go up against the Pixars of the world and win the race to create the first truly successful virtual world for boys? Or will this be seen as nothing more than a way to hook kids on buying and upgrading their Ridemakerz cars? 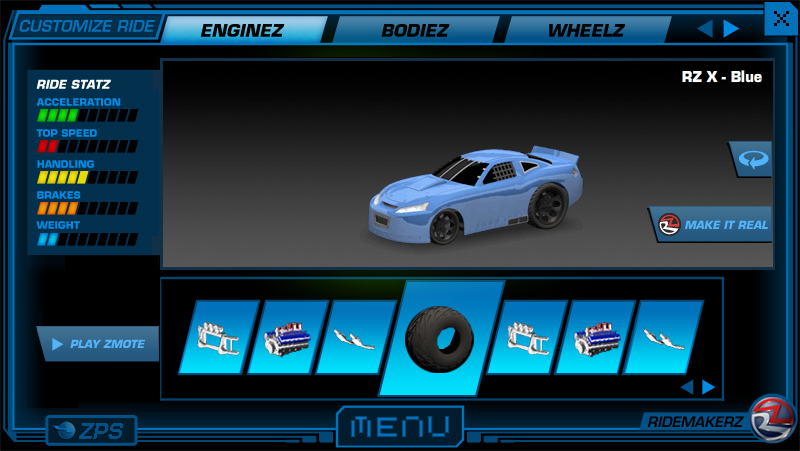 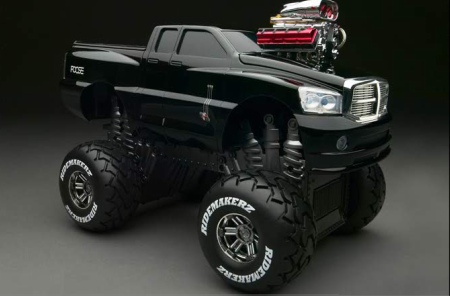