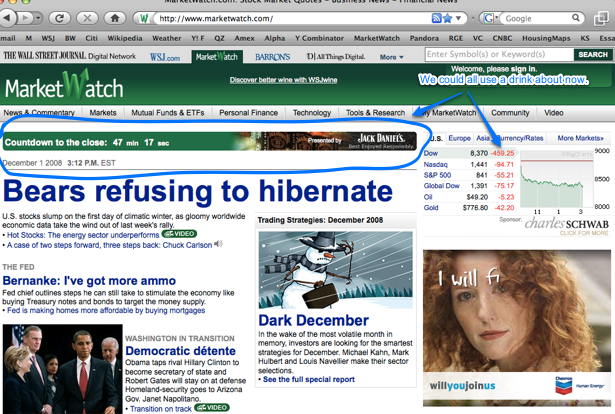 File this one under “Unfortunate Ad Placements.” On a day that the Dow dropped 680 points (7.7 percent), MarketWatch ran the Jack Daniels banner ad in the screenshot above (sent to us by reader Scott Murff). The ad shows the “countdown to the close” of the market in minutes and seconds, suggesting that might be a good time for a drink. Juxtaposed with the headline “Bears Refusing To Hibernate,” it takes on additional meaning.

It becomes a commentary on the financial markets themselves: there is not much you can do in a down market but drown your sorrows (so might as well drown them in Jack Daniels).

Does the unintentional pairing with the headline make it a more effective ad or a tasteless one?