With the growing amount of information that is flowing into our lives, there is also a growing need for tools that help focus our attention on what should be the most relevant information for us. my6sense is developing artificial intelligence that does just that—it separates the signal from the noise and helps users shift their attention to the content they care about most. my6sense is calling this type of assistance “Digital Intuition” and in the simplest sense it’s a recommendation technology that automatically ranks and serves information that match user preferences at any given time.

In order to achieve effective information ranking my6sense goes about creating user preference models. my6sense’s magic sauce is in translating user actions, for example Web navigation, into semantically-sensible, rich, implicit feedback. So if a user picks the fifth headline in a ranked list, for example, the system would learn from that preference and present like items up top in the future.

The company makes a point in distinguishing what it does—ranking—to perform filtering. This can be best understood by the old adage: To find a needle in a haystack, one doesn’t have to burn the haystack, just make sure the needle lies on top of it. The beauty is that you don’t need to give the product feedback, it infers what your feedback is all on its own.

The “learning machinery” that makes sure the needle is on top of said haystack is rooted upon a multi-dimensional set of features comprising of:

Once filtering is achieved, my6sense then attaches context-relevant actions to the content. This is an important aspect of the service that is at the heart of the company’s future business model. The actions will be tied to rev-share deals struck with content and service providers, as well as mobile carriers. For example, music related content would trigger premium content and service actions such as ticket or ringtone purchasing.

The company is working on releasing a full blown API to this end during the coming year. In the meantime, they’ve developed a couple actions themselves, for example writing comments on posts based on WordPress, TypePad, Blogsmith and Movable Type.

The company is initially targeting the technology at the mobile space rather than the Web. It has several reasons for doing so. First, the Web is a very crowded space to push such an offering into and there’s always the concern of becoming “just another cool application”. Second, the technology’s benefits are far clearer when applied to a mobile device and its inherent limitations when it comes to screen size and supplemental user control. Also, discovering content and information through a mobile device requires a different level of attention and consequently a different toolset than doing the same on the Web—my6sense is perfectly suited to this context.

For the past 10 days I’ve been testing the Alpha version of my6sense which is available only as an iPhone web app. I wasn’t ready to ditch my information consuming habits quite yet and was therefore concurrently reading RSS feeds through Google Reader. The methodology I applied was to click into the same posts on both apps to see what would happen on my6sense. The “A-ha moment” took a couple of days of interacting with the product, but it came. Suddenly, very relevant info was floated to the top of the main “TOP MESSAGES” pane. By relevant, I mean posts I would absolutely have clicked on through my Reader, but would have had to sift through hundreds of posts before doing so.

It’s not nearly perfect—there’s a certain level of content noisiness the company purposefully put in for testing purposes—but for an Alpha product claiming to provide “digital intuition” it delivered. From my usage so far, the top most item is almost always from Hacker News. It is often followed in various orders by TechCrunch, TechMeme, and Lifehacker. The items themselves usually relate to Google, Facebook, and the iPhone which didn’t entirely surprise me, but that doesn’t mean I typically read every post I come across having to do with them. In the case of the items floated by my6sense, I felt compelled to read them all. Remember, this was all done without providing implicit feedback such as thumbs up, down, or rating of any sort. The screenshot below shows the top items my6sense analyzed as most relevant for me today.

Is “digital intuition” really important? Here’s one example that leads me to believe that it is: I engage with Facebook in three ways. Directly with Facebook.com, using the iPhone Web App and finally using Facebook’s native iPhone App. Here’s the curious part. My News Feed is not symmetric across the three—meaning, I get different News Feeds for each one. While they may not be radically different, they still float different items. I can’t explain this, but it certainly leads me to believe that Facebook is putting an effort into this realm as well.

(Disclosure: Nearly a year ago, on a Sangria-laden evening in Barcelona, I struck a friendship with two of my6sense’s co-founders, Barak Hachamov (Visionary Geek & Chairman) and Avinoam Rubinstain (CEO). I’ve been following their company’s progress since then). 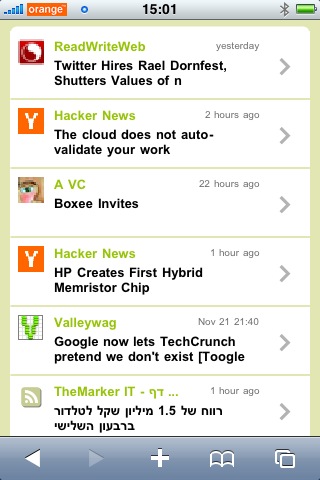