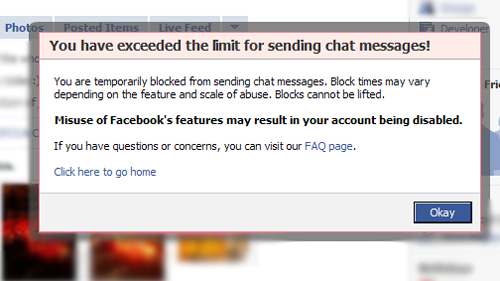 Some Facebook users are complaining that they are being banned from Facebook Chat for sending too many messages, when in fact they’ve sent few or no actual messages. The bug appears to be affecting Internet Explorer users.

Dozens of other problems are being reported with chat as well, but this particular issue seems sort of ridiculous. Only your Facebook friends are on your chat list, so even the fact that the error exists is odd. Is there really such a thing as sending too many messages to friends?

Update: Facebook has responded with the following: “Some Facebook users received a message in error that Chat was disabled for them due to a bug in the system. A team of engineers worked to resolve the situation and Facebook Chat should be restored for anyone affected. We appreciate the reports from our users that help us make improvements to the product and apologize for any temporary inconvenience.”