Social news community Mixx is seeing healthy growth ever since they left stealth mode. They got a nice traffic spike last May after CNN integrated ‘Mixx it’ buttons in their articles, roughly doubling their number of unique monthly visitors to nearly 1 million, and it appears their new community building features aren’t hurting them either.

A screenshot from their Google Analytics account shows that the Digg-competitor is gaining traction, receiving over 5.8 million unique visitors last month. Compete (as usual) estimates lower numbers but shows a similar growth pattern, as does Google Trends. Quantcast seems to affirm the number of reported visitors as well.

So how does that compare to Digg?

While we don’t have any insight on their internal stats, we do know Comscore, Compete, Quantcast and Google Trends all show that Digg yields much more traffic than Mixx, even if growth appears to be stagnating while Mixx’s is soaring.

So whose numbers are you going to believe? It’s important to note that the Hitwise report was based on a 4-week study, which is in my opinion far from enough data to jump to any conclusions about the difference in user demographics. When you take the comScore data into account, the demographic differences seem pretty minor. Certainly they are not big enough to make any solid statements about Mixx being more mainstream than Digg.

Still a nice traffic growth pattern for a website that’s only been live for about a year and raised only $3.5 million in funding so far (Digg, for reference, has raised $40 million to date). Below are some comScore charts for the U.S. 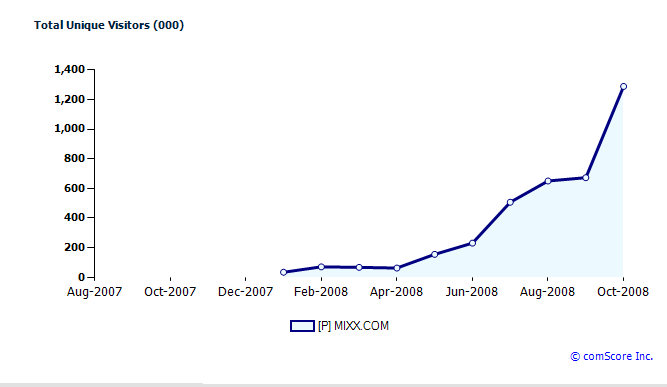 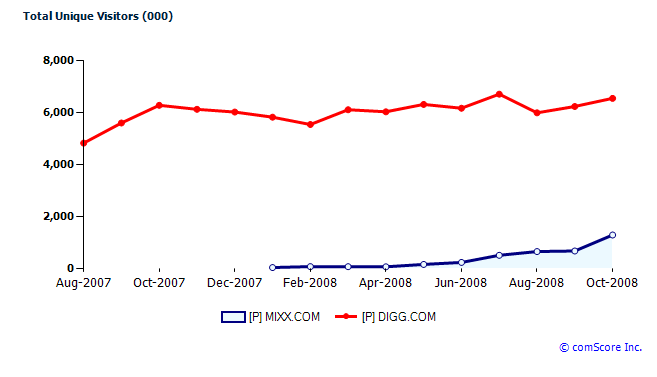