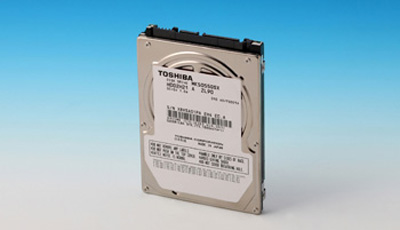 So Toshiba has a 2.5-inch hard drive that might interest you. The SATA hard drive ranges in capacity from 120GB to 500GB, the 500GB model being the jewel in Toshiba’s crown. They’re only 5400 RPM, so don’t expect blazing fast speeds or anything when you slide it into your laptop.

There’s one other thing, and that’s that Toshiba claims, through some sort of witchcraft, that it was able to reduce the noise emanating from the drive so as to improve audio performance. (How good are your headphones that you can hear the sounds of the HDD spinning?) Oh, and Toshiba may be able to slap a “green approved!” sticker on the box, sorta like what NBC is doing nowadays with its great TV shows, seeing as though it has reduced power consumption from previous its previous hard drive generation from 1.7W to 0.5W.

It starts shipping in December. No price, though.