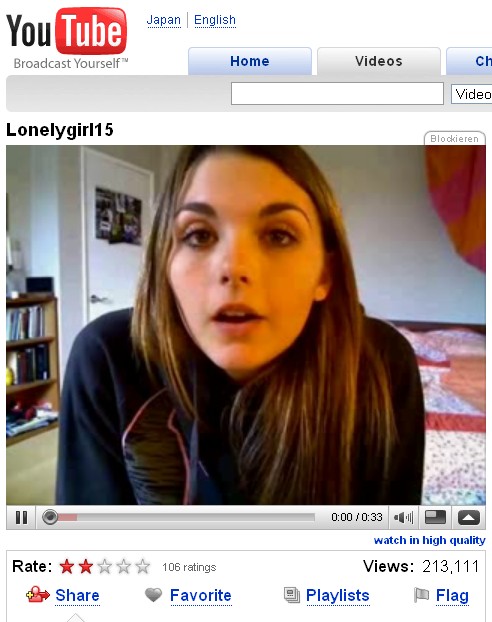 Why do certain videos on YouTube become mass phenomena while the vast majority of videos just get a handful of views, if any?

Riley Crane, an American post doctoral fellow currently researching at the Chair of Entrepreneurial Risks at ETH university in Zurich/Switzerland, says he has the answer: According to him, the success of online videos can be explained with physics.

Crane claims every time a YouTube video turns into a hit, the development takes the form of an “attention spiral”, a geometric pattern that partly follows physical laws. He discovered that a decrease of popularity with certain videos, for example, can be explained through methods usually utilized in modeling the aftershocks of earthquakes. He believes social systems on the web follow the rules of physics and can therefore be analyzed mathematically.

The popularity of YouTube videos can be characterized through curves visualizing increases and decreases in the number of viewers and the amount of attention they pay to each video. For example, the following graph shows two different attention spirals (top left: level of search activity following the Tsunami that hit part of Asia in December 2004; top right: the volume of search queries for Harry Potter between April and October 2007, bottom left:views of Harry Potter videos on YouTube; bottom right: views of tsunami videos on Youtube): 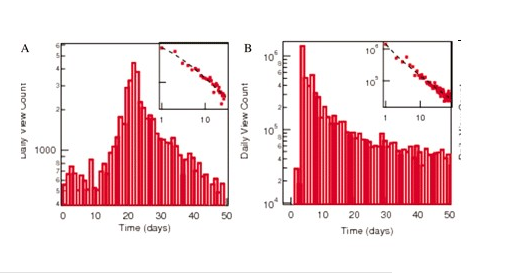 After researching the usage of about 5 million YouTube videos over 8 months, Crane found out that only 10 percent are viewed more than 100 times a day. According to Crane, the popularity of these videos can be measured through distinguishing whether a burst of activity was observed after a large-scale “exogenous” (external) shock or whether it’s the result of a number of smaller “endogeneous” (internal) factors that had a cumulative effect. Also, it seems to be important to take into account the extent to which web users can influence others to take action (what he calls “critical” vs. “subcritical,” where the latter term means exerting influence is impossible). 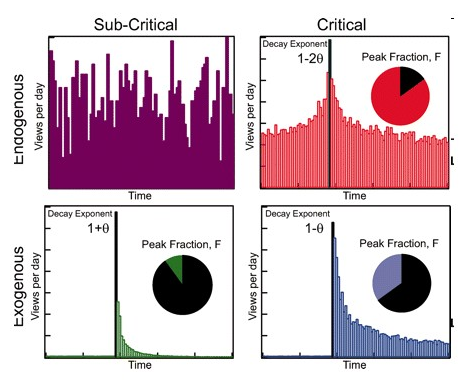 Junk videos are characterized by a significant peak that contains the vast majority of views and fail to spread through the site. In contrast to quality videos, viral videos show precursory growth before peaking out and decaying slowly (see the Harry Potter example above, diagram A): It takes time for the endogenous phenomenon to build up and spread within the network. Quality videos, however, reach the peak much faster as a reaction to an external “shock” but also decay slowly (see the Tsunami video example above, diagram B).

Crane claims that viral and quality videos show very characteristic patterns over a specific period of time, supposedly making it possible (through the analysis of tendencies) to predict if a video has the potential to become a super hit.

The final goal is the development of an encompassing and science-based online trend monitoring system. The university newsletter writes (German only) Amazon is currently in negotiations with Crane to integrate his model into its site, hoping to predict the potential of newly listed products at an early stage.

The critical factor here (and one of the long-term objectives) is to correctly determine the tipping point, the point in time at which the viral effect kicks in and sales or (in the case of YouTube) views of videos take off. Details of the model developed by fellow researcher Didier Sornette and Crane can be found in the October issue of PNAS magazine (available online here).