Remember Metacafe? That’s right, the video entertainment site which got overshadowed by YouTube’s phenomenal rise? Well, it’s now making a huge gamble on a new product direction and doing so with zero guarantees. The gamble is WikiCafe, a collaborative editing approach for video metadata. To appreciate how important WikiCafe is to Metacafe just take a look at the company’s official R&D resource usage: 60% WikiCafe, 30% revenue generating opportunities, 10% everything else. That says it all.

I spent a few hours with Eyal Hertzog, the company’s co-founder and Chief Creative Officer who walked me through the company’s new product vision and the rationale for its big bet on the wiki approach to organizing videos. Hertzog was frustrated that users (he being among them) couldn’t just locate “THE” result when searching for a video. His definition of “THE” being a single video result that encompasses all the relevant (and preferably accurate) info, along with multiple language versions, captioning, and so on. The current reality, of course, is that when we perform a search for a video we get back multiple results—sometimes even in the hundreds—from multiple sources, in various languages, with different view counts, fake versions . . .. You all know the drill.

“We actually believe that quality metadata is as important – if not more important – than the videos themselves. We’re focused on delivering a great entertainment experience through short-form video, which means we have to make it easy for people to find and discover great videos every time they come to Metacafe. The only way to do that is to have accurate and complete information about what the videos on our site are about. And we believe the only way to get that information is to enlist our community’s help. WikiCafe is absolutely essential to our strategy going forward, and we believe it gives us an unprecedented competitive advantage over other sites.”

Put simply, WikiCafe is everything you’ve come to learn to love about Wikipedia but attuned to video. It is a collaborative video metadata editing tool built on top of WikiMedia, the Wiki platform originally written for Wikipedia. Its purpose is to foster collaboration and aggregation of standardized, categorized knowledge on a single “document”—in this case a video.

The collaborative taxonomy used by WikiCafe is created and maintained by the community, so just like Wikipedia, it has the potential to become more comprehensive and accurate over time. Of course another major benefit is that the community polices the edits the data so the amount of false-positives and spammy results could dramatically decrease—not all at once, but Rome too wasn’t built in a single day.

The backbone of the system is an advanced tagging system that supports:

Editable metadata information includes Title, Description, Rating Properties (sexy, violence), Language, Country of Relevance, and more. There are also metadata templates such as “Music Info” that includes Album, Artist, Genre, and Label. There are also flags such as “Suspected Duplicate” and “Misleading Thumbnail”.

While Hertzog gave me a walk through we edited this video’s tags from ‘TechBrunch’ to ‘TechCrunch, and added ‘Michael Arrington’ to the already existing tags ‘Michael’ and ‘Arringon’. You can see the revision history here.

So far WikiCafe is exceeding the company’s expectations. The system is currently logging 14,000 user Edit Actions per day, up from 4000 in September. In my book Metacafe deserves kudos in this respect as well because forming a collaborative community is in many respects far more difficult than delivering the collaborative technology.

ComScore’s September numbers position Metacafe as the web’s largest independent video site with 38M unique users worldwide, led only by YouTube and MSN (it passed DailyMotion and AOL Video in the summer). Time will tell whether Metacafe’s gamble on WikiCafe will pay off, but you have to admire the company’s vision and courage. Instead of sitting still it’s pushing the envelope in delivering its audience the most accurate video results. Speaking for myself, I’ve begun developing a habit of searching Metacafe before trying my luck on YouTube. 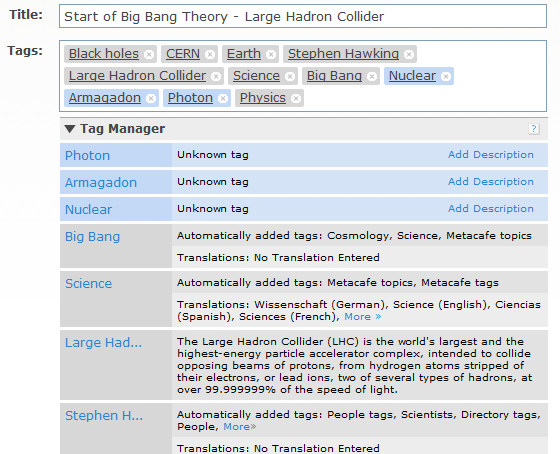