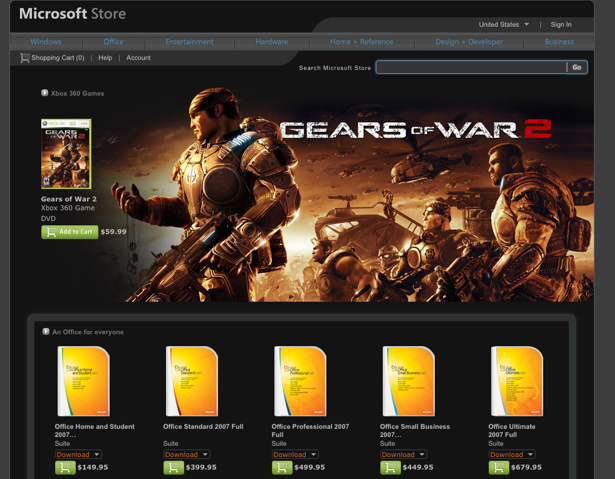 The days of buying packaged software loaded onto CDs are numbered. Today, Microsoft quietly drove another nail into the coffin of packaged software by launching the Microsoft Store on the Web. After testing the software download store in Europe and Korea, Microsoft opened up its U.S. version today.

The store sells all Microsoft software from Office to Xbox 360 games. Instead of shipping the software in the mail, you download it over the Web. Just like you can download apps directly to your iPhone from the iTunes App Store, the Microsoft Store takes the same approach for its own PC and server software. (It does not distribute mobile apps or software made by other companies).

CEO Steve Ballmer hinted this would happen last week. But the company did not make a big deal about today’s launch, perhaps not wanting to alieante any of its retail distribution partners. . Microsoft program manager Trevin Chow put out the word on his personal blog, explaining the benefits of Electronic Software Distribution (ESD):

You pay for an ESD product just like you would for one that would be physically shipped to you. The big difference is that after your payment is confirmed, you can immediately download the product to your computer and install it right away. There is no longer any need to pay for shipping costs and waiting for the big brown truck to drive across the country. You’ll be able to enjoy your software almost immediately – all it takes is the download time of the product, which will vary depending on the size of the digital download.

The store also sells Microsoft peripherals such as Xbox 360 consoles, computer mice and keyboards (those need to be shipped).