Mountain View, Calif.-based Keystream is leaving the beta status behind and launching SmartAd today, an SaaS platform that enables publishers and advertisers with falling ad revenues to start inserting advertisement overlays into Web videos right into its ’empty spaces’, meaning any area on the screen where the action isn’t taking place.

And who thinks inserting unavoidable, out-of-place logos and interactive ads in video streams (even live-streamed events) is a good idea, besides Keystream and hopefully a very small amount of desperate publishers and advertisers? Right, nobody does. 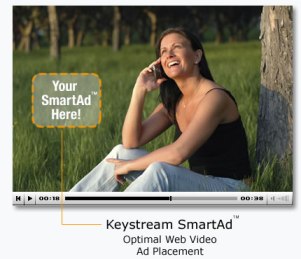 Sounds more like a DumbAd to me. If a video stream includes a scene featuring a big blue sky, a white wall or a grass field in the background, the maker probably put it in there for a reason. Who in their right mind would want to see ads placed right on top of those, even if that’s not where the ‘action’ is taking place? Annoying people with ad overlays that cover vital scenes or parts of a video stream is even worse, but not that much.

The company’s press release reads: “blank spaces are found on average once every two minutes, providing an ad insertion opportunity that increases video ad monetization.” So that means you can expect to be bothered about 15 times if you’re watching a 30-minute video stream.

And they still have the nerve to say SmartAd “offers dramatic improvement in user experience” and that the ads are “non-obstructive” and “increase audience engagement”. I’d say they have a good chance to increase gagging and uncontrolled outbursts of anger by people who are tired of being fed irrelevant advertising without the ability to turn it off, but maybe I’m missing something.

As NewTeeVee points out, the UK’s ITV is already trialling the technology, as are USswitch.com and Freesat in the USA. Let’s hope the trials fail. Obviously, there is a need to open the advertising spigot when it comes to Web videos, but this is not the way to do it.

Keystream raised $1.3 million in venture capital led by Voyager Capital and joined by a couple of angel investors at the beginning of 2008 and is in the process of looking for a second round. Any investors looking to support a rotten idea can apply now.