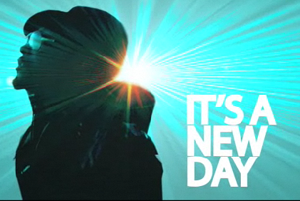 Only three days after the close of one of the most historic elections in US history and the selection of Barack Obama as President, will.i.am has created a followup to his smash hit viral video Yes We Can. The new song, called It’s a New Day, made its debut on iTunes last night (you can download it here), and will be shown on this afternoon’s episode of The Oprah Winfrey Show.

Yes We Can features a collection of celebrities and musicians embellishing and singling alongside one of Barack Obama’s most memorable speeches, and as been viewed as many as 50 million times across countless online video sites. The new song is more traditional, celebrating Obama’s victory with references to past heroes of the United States and the civil rights movement. We’ll post the video as soon as it is available.

Update: Here’s the clip of will.i.am’s performance of It’s A New Day on Oprah this afternoon:

Here is the video for Yes We Can: