Facebook CEO Mark Zuckerberg takes the stage with John Battelle at the Web 2.0 Summit in San Francisco this afternoon, at about 2 pm.

Like Jerry Yang yesterday, Zuckerberg has a lot to talk about regarding the state of Facebook, and its future.

Our real time notes from the interview are below.

Battelle is talking about how much Facebook has changed over the years, joking that Zuckerberg now wears tennis shoes, not just sandals.

First question, Battelle asks Zuckerberg about new financing rumors and trips to Dubai. Zuckerberg remains silent. In response to the question “Do you need money?” Zuckerberg says “no.”

Battelle digs deeper, asking if Facebook might run out of money sooner than they thought a year ago. Mark says that the site has grown much faster than they anticipated, but that international growth via user-translated sites is an efficient way to go. Mark also says the company has two very strong revenue lines – direct sales and online sales. Battelle asks him to break down the two streams, Zuckerberg won’t comment. He also brings up Microsoft revenue, but only says it represents a decreasing percentage of overall revenue.

Zuckerberg commenting on the Microsoft investment: “A lot of people focus on the price Microsoft paid.” Battelle asks how Facebook can ever grow into that valuation. Zuckerberg says they took the best valuation they could get and it made sense for them to do the deal. They aren’t going public for a few years, he says. “We don’t feel any pressure to live up to the $15 billion [valuation],” he says. 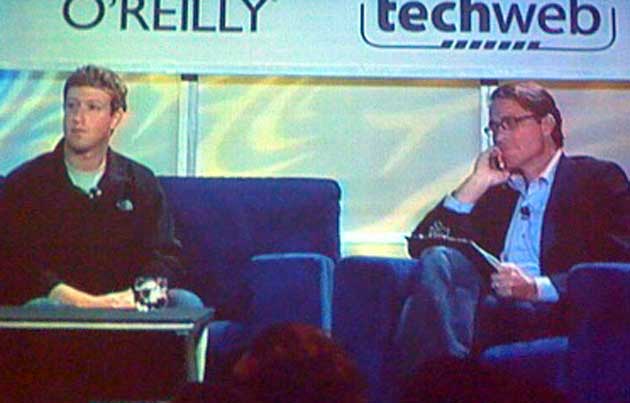 Mark confirms that “something more than 700” people work at Facebook, and says they continue to hire, particularly engineers. He also says they are building international sales offices. Mark says 7% of the population of France is now on Facebook, and that he wouldn’t be surprised if it was 30% next year. They may open a sales office there, he says.

Regarding Facebook Connect, Mark says that anyone can now apply to join.

In response to a question about how closed Facebook is, he says that over time they may open up, but that users prefer using Facebook’s interface for now. He says that systems tend to move towards openness over time, uses the PC industry as an example.

Mark says their goal today is to get people onto Facebook and get them comfortable putting their personal information online to share with friends.

The next iteration of platform, he says, is Facebook Connect, which gives people Facebook tools on third party websites. “As time goes on, we’ll see this very natural fanning out and decentralization,” he said.

Mark says a flaw in the early implementation of Facebook platform is that application developers focused way too much just on getting users to add it, which moved them up the top list. Now Facebook promotes applications that actually have user engagement. Four examples: Causes, which is growing by “hundreds of thousands of people per day.”

Battelle turns the conversation to online ads. Mark says they have a second iteration of social ads, which let users pass along gifts or pieces of content along with the ad unit.

Battelle ask about Facebook being banned by companies, noting that the army sees Facebook as a problem. Mark says they’re seeing the opposite trend. He says companies that used to block Facebook are now letting them use it.

Mark stresses that its still very early on the platform side, and doesn’t rule out working with Google on OpenSocial.

Mark mentions that 50% of Facebook users are active every day on the site.