What a day for Yahoo CEO Jerry Yang to take the stage in front of a thousand or so people at the Web 2.0 Summit in San Francisco. The Google search marketing deal is toast, and it’s not clear what Yahoo’s plan is as the company’s stock continues to wither.

Yang says its been an “amazing year” in response to Battelle’s first question on how he’s doing personally. Battelle then asks what happened to Yahoo this year, going back to Microsoft’s offer to acquire the company in February 2008.

Yang says flat out that he’s open to a sale to Microsoft, that they were ready to negotiate a deal and that they weren’t that far apart. He says Microsoft continues to be clear that Microsoft is no longer interested in the deal. Yang also says that he and his board of directors felt that at all times they did the right thing. Both sides are to blame, he says, for the deal not happening.

Battelle says that a lot of people claim Yang is to blame for the deal falling apart. Yang counters, saying he is indifferent about keeping Yahoo independent and just wants what’s best for the company. He also reiterates that they went back to Microsoft after the offer was revoked to get them interested again.

“I have a lot of respect for Steve [Ballmer]”

Battelle then asks about the Google search marketing deal, which fell apart today. “What happened,” he asked. Yang says they were working with the Department of Justice to make the deal worked, but Google “clearly didn’t want to stay in the deal.”

Yang says that the deal was a way for “two competitors to try and compete more by doing this.” If Yahoo could take advantage of Google’s ads, he says, users would have a better experience, which would help Yahoo “compete vigorously” in the search marketplace.

“It’s disappointing to us that Google didn’t want to defend this deal,” he said.

Yang says the government doesn’t understand our industry and has a market definition that is too narrow. “Things like this have unintended consequences on the broader industry,” he said.

Battelle asks “You founded Yahoo 15 years ago, for the first 8-10 years Yahoo was the standard bearer for the Internet. Then you had a crisis in ’06, and you came back as CEO. Why? Why do that to yourself? Are you the right guy?” Yang answers: “It was ’07 when I stepped back in…I didn’t make the decision to be CEO lightly…In retrospect, I don’t take my position lightly…I wanted to make the changes at Yahoo that I believe I’ve made. There has been a lot of change, a lot of people coming and leaving, but the plans we’ve tried to execute against have been done and I’m extremely proud in the sense of rewiring Yahoo as a platform company.”

“I don’t regret any minute of what happened.” 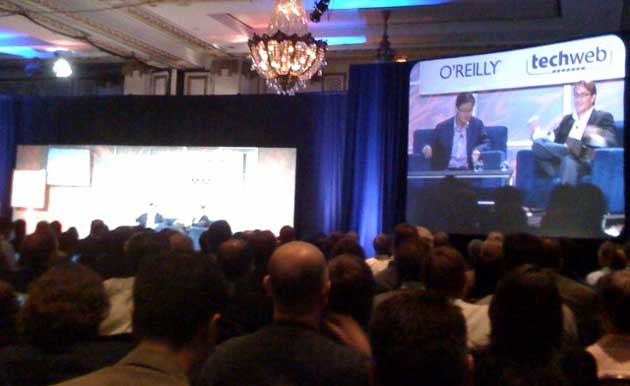 “What is the vision for Yahoo” Battelle asks.

“Yahoo is a consumer brand that allows people to do what they want on the Internet.”

Yang says that opening up Yahoo as a platform is important. YOS allows third parties to developed applications for the Yahoo audience. “It’s very different from Facebook” he said.

Yang talks about Search Monkey and BOSS and how it is changing the search experience by bringing in third party apps and they opening up search as a web service.

Battelle asks what went wrong historically with Yahoo, and if Yahoo culture of fiefdoms got in their way. Yang responds that Yahoo’s culture is changing, and that the company needs more product discipline. Historically the company had scale problems, he says, because they didn’t have a platform approach.

Battelle says there are three companies that want to be platform advertising players: Google/Doubleclick, Microsoft and Yahoo. He asks what Yahoo is trying to do with Apt, their new platform that let’s publishers form advertising subnetworks under Yahoo. Yang says they are able to bring a large audience to advertisers, but APT creates a liquid and fluid market where all types of advertising can be sold.

Battelle talks about Yahoo three years ago, when they bought Flickr and Delicious. Those days are over, he says. Will Yahoo start buying again? Absolutely, Yang says. “We bought 40 companies this year,” he says. It’s very important to us, he says.

In response to an audience question about search competitiveness going forward, Yang says he believe search is innovation based, not capital based, and that he believes Yahoo is spending enough on capex.