Live video streaming seemed to be all the rage for a while, popularized by startups like Justin.tv, Ustream, Qik, Mogulus and Flixwagon.

Yahoo jumped on the hype wagon back in February 2008 by launching Y!Live, an ambitious effort put forward by internal incubator Yahoo! Brickhouse. Yahoo Live was supposed to tap into the troubled internet juggernaut’s vast online video audience by getting them to broadcast their lives in real-time.

Live video streaming still presents an enormous opportunity considering the way people’s behavior on the web is changing, but it is of course extremely expensive and hard to scale. Serving the same video to thousands, let alone tens of thousands of people simultaneously generates higher bandwidth bills than serving them asynchronously like most video sharing sites do. YouTube, by far the most popular online video property on the web, is rumored to want to start experimenting with live video streaming some day, but so far we haven’t seen anything surface.

Perhaps the Yahoo from a year ago would have no problem continuing to test the waters and keeping the service alive a bit longer, but the way things are looking now they’ll be looking to cut costs in every possible way for a while.

(they were probably in moderation when I wrote this). Also, at the time of this writing there are exactly 1,379 people watching 48 live channels. 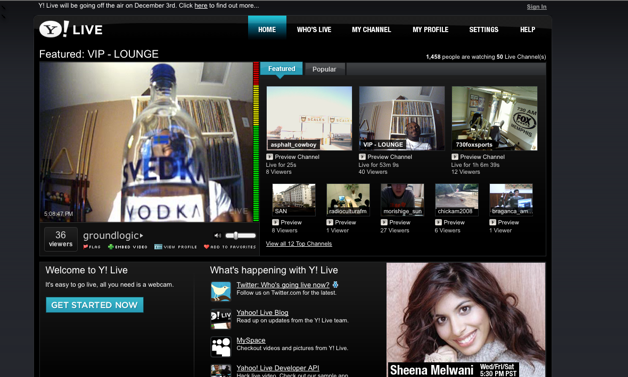