If you have kids and Nickelodeon (or Nickelodeon.com) just doesn’t cut it for you all the time, tune into Totlol. It’s children’s Web video for the children of the YouTube generation. In fact, Totlol was built by one developer in Vancouver, B.C. (Ron Ilan, father of two) entirely on the YouTube platform. It is a collection of thousands of child-appropriate video clips from YouTube, chosen by parents, and rated by toddlers.

Totlol uses the YouTube API and reskins all the videos with its own player (much like we do with Elevator Pitches). Viewers can rate and collect videos. Collections act like playlists. Plop your child in front of the computer, and it plays all the way through (not that I would ever do that, of course).

So why not just watch these videos on YouTube? Totlol acts as a filter for these videos and presents them in a more child-friendly format. Every video on the site has been vetted at least once by a parent (hopefully). Ilan explains what he hopes to achieve with Totlol:

How do you take those lousy clips form YouTube and make them beter than any DVD collection you have?

Those who sign up as members are given extensive parental controls. You can block individual videos, and set time limits, for instance. Totlol launched last May, but Ilan just recently added Totlol a full-screen player for members that makes the whole experience more like TV. And he is adding more features all the time, such as an AgeOptimizer that “algorithmically optimizes the site content to a requested age group.”

For a video site built by one person, Totlol is impressive. And it shows how YouTube could give rise to hundreds of niche video sites with their own features and communities. Although, what Totlol is missing is a channel on YouTube itself, which would probably be the best way to recruit more toddlers and their parents to Totlol itself. 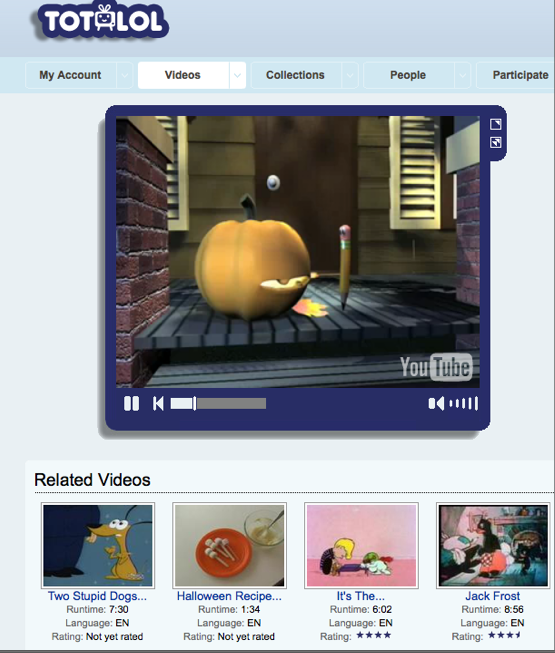