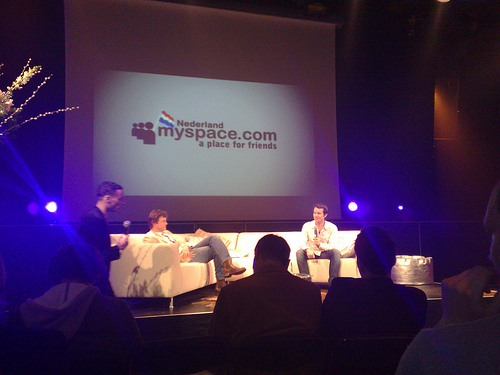 According to several sources, MySpace has decided to throw in the towel with regards to its expansion in The Netherlands. The social networking site had opened up an Amsterdam office merely 9 months ago but has now announced it will shut it down and move the Benelux operations over to its Berlin office.

In February 2008, shortly after its official launch in Holland, word got out that MySpace had tried to acquire leading Dutch social networking site Hyves. The acquisition fell through and MySpace declared it was confident that it would be able to obtain sufficient growth on the market on its own. According to country manager Derek Fehmers, the site did attract 250,000 extra users adding up to 650,000 in total since it launch, but apparently Hyves (which cites over 5 million registered users, representing about 33% of the nation’s population) was much harder to beat on its own turf than anticipated.

Fehmers also added that MySpace knew it was entering the market quite late and faced an extremely well established competitor (Hyves), and ultimately decided the added value of a local presence could no longer be supported from a business standpoint. Facebook and Netlog are now the only major players trying to obtain a piece of the pie.

In an onstage interview with Michael Arrington at TC50, MySpace CEO Chris DeWolfe stated that their international strategy was to focus on the 9 countries that bring in 95% of the advertising revenue and where it would be able to become the market leader by a margin. I guess The Netherlands wasn’t one of those nine.

Another caveat from the interview, which was republished by many Dutch news sites: MySpace is focusing its efforts in launching MySpace Music across Europe in the first quarter of 2009.