Critical Media CEO Sean Morgan has some advice for TV broadcasters who are still using $50,000 workstations and a team of professional video editors to upload TV clips to their Websites:

Fire your editor, and here is your username and password.

The password he wants to give them is for Syndicaster, his online video editing and syndication platform. Launched in beta in January, he has now just released Syndicaster 2.0, which lets TV stations edit and publish video clips from their regular broadcast to their own sites and across the Web within a minute after the video airs.

Currently, it can take TV stations hours to process video for their sites. With Syndicaster, everything is done through a browser. So no special hardware or software is needed. And the video doesn’t even need to be uploaded because Critical Media captures and digitizes live video from more than 700 local TV stations.

I was given a demo of the product, and while the UI is a little Windows 98, the underlying capabilities are pretty impressive when you consider that the system is taking raw video feeds from TV and making it Web-ready in a matter of minutes. Search results come up as thumbnails, along with transcripts. Click on a word, and it takes you to that point in the video. The clip can be bumped to the point the editor wants it, and then it lets you pick a thumbnails, add a title, descriptions, and categorize the video with automatically suggested keywords that make it easier to target ads to each video. Says Morgan:

We want to own the ad taxonomy on professionally produced video.

Once the video is ready to go, a drop-down menu lets a video editor post it to his TV station’s Website, as well as to YouTube, AOL, and ClipSyndicate (Critical Media’s Web video syndication platform). Already, 80 TV broadcasters are using Syndicaster.

Morgan’s pitch to them: Instead of 10 video editors at 10 TV stations dedicated to uploading stuff to the Web at a cost of $30,000 to $50,000 per wokstation, Syndicaster can replace that with one editor at a cost of $3,000 to $5,000 a year in Syndicaster subscription costs. That one editor could see all the video from all ten stations and prepare clips for the Web. And he could do it all in his pajamas from home.

And while Syndicaster is only for TV video professionals at this point, many of the same capabilities will be available to everyone in a product called ConsumerCaster that should launch some time in the first quarter of next year. 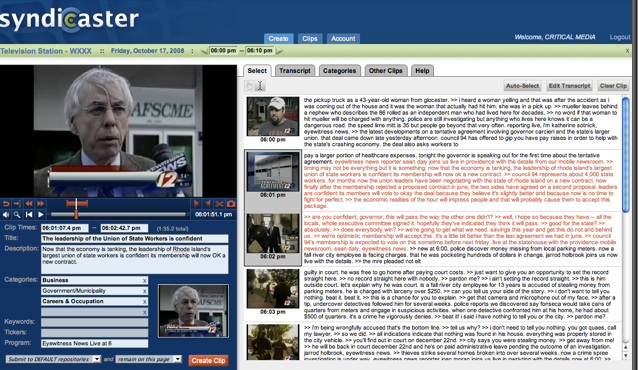 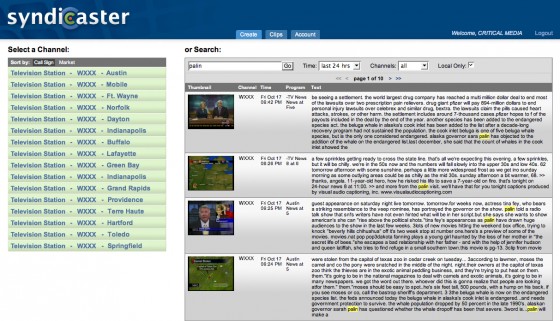