If Content is king then Data is its prince. And generally speaking, the more unique and difficult it is to gather, the greater is its value. A recent example of this is RepairPal which applies a narrow and deep approach to collecting data on automobile parts and repair prices in the US. The data collection is anything but trivial and requires significant manual labor, but the outcome could be a significant and valuable dataset. Israeli IMScouting is taking a similar approach but applying it to data related to football players. (Note: In the context of this post Football = Soccer).

Users can slice and dice the data in any number of ways to compare players side-by-side and filter search results by position, nationality, salary, and more. Advanced search is pretty impressive. For example, a search for an Argentinean player with a max age of 25, on his last year of contract, playing a forward position with a strong left foot, produced two results: Carlos Tevez, currently playing for Manchester United, and Juan Caffa, currently playing for Real Zaragoza (on loan from Real Betis). Tevez’s estimated market value by the way is around 30M GBP (~$49M USD) with an estimated weekly salary of 100K GBP (~173K USD). Quite a steal!

IMScouting collects in-depth data on 48 leagues in more than 40 countries with a total coverage of over 40,000 professional footballers. The data is collected using a network of 40 “correspondents”—football experts situated locally in European, African and Latin American countries that IMScouting employs to report data back to the mothership. Propriety crawlers are also used, but to a lesser degree. In-house experts—journalists, ex-players and other football experts—review the data to ensure reliability before it’s made public. Data goes pretty deep:

IMScouting also provides general information such as results, fixtures and stats on more than 500 leagues around the world. These include full match reports for some countries in Eastern Europe and Africa that are not typically covered by the mainstream press. There is also an assortment of content in the form of daily football-related business news, a weekly “Player to Watch” and special reports.

The obvious question that comes to mind is “could it really be true that such data is not readily available for world’s most popular sport?” The company’s CEO Dvir Ben-Aroya provided what I believe to be strong validation that this is indeed the case. His answer was “Pini Zahavi”.

This name may mean nothing to most of our readers, but there certainly should be members of our UK audience that do recognize it. Zahavi is considered to be a football super-agent with a particularly strong presence in the wheeling and dealing of UK football. His Wikipedia page states:

Zahavi sits on IMScouting’s Board, which is a huge coup for the company.  His presence suggests that he thinks this data is worth something. Plus, Zahavi can most likely open any door the company requires opened.

The company believes that 65% of professional football players are traded each season, with 700+ teams looking for talent in Europe alone. They also believe that there are over 150,000 active football scouts and agents worldwide. To this add the huge amount of football fans seeking reliable, high-quality information about their favorite clubs and players. IMScouting believes this all amounts to a huge opportunity.

Initially, the company is basing its business model on a subscription service. Agents, scouts, and other football professionals are offered the service for €1,200 for an annual membership and €400 for a quarterly membership. The company is already testing the waters with advertising and will move into data syndication as well. The next phase of IMScouting will see it becoming more of a destination site for football fans so expect the usual assortment of social networking goodies.

IMScouting picked up $1.3M in Round A financing earlier this year from Giza Ventures, AfterDox and private investors. The company is about to commence its fundraising of Round B. 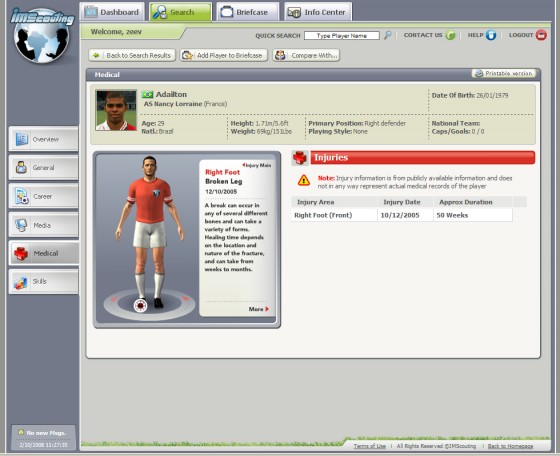 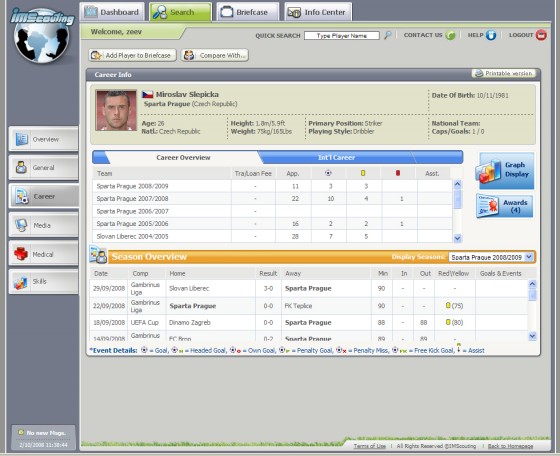 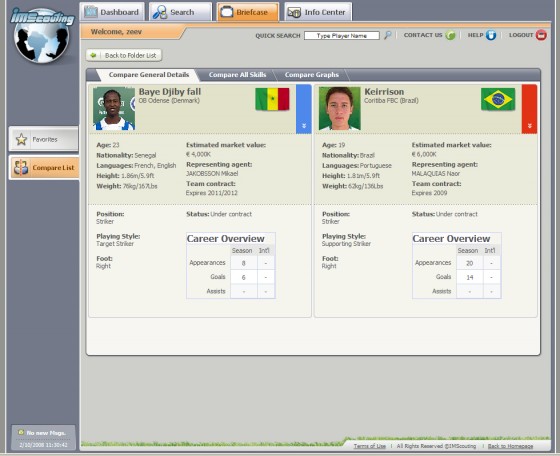