As a boy I fell in love with Whodunnits – mystery stories that weave subtle clues into the plot that allow the reader to solve the crime alongside the story’s protagonist (usually a brilliant detective). Novel-length whodunnits are still alive and well, but many of us would prefer more bite-sized mysteries, which are surprisingly hard to come by. In the 90’s Salon published a regular series called 5 Minute Mystery but it was eventually discontinued. Now entrepreneur Randy Okane is trying to bring the format back to life at his site 5MinuteMystery.com.

Every day the site posts a new mystery, followed by the solution the next day. At the end of the story is a menu asking who the reader thinks committed the crime. Users are also asked to highlight up to four statements in each story, indicating if they either Exonerate or Incriminate one of story’s characters. To help spice things up, the site keeps score for every member based on their accuracy, with the most ingenious detectives featured on the site’s leaderboard.

Unlike many mystery stories, which tend to be gruesome, 5MinuteMystery is being written to appeal to a younger audience. Crimes are gore-free, and tend to be written at an accessible reading level. The site charges $20 a year for a daily subscription, and offers a program for schools and charities who receive 50% of all subscriptions sold through their fundraising efforts. Prospective authors can also submit their own stories and will be paid if their stories are published.

While many of these stories tend to require ridiculous leaps of logic and assumptions, they’re fun nonetheless. Provided the site can ensure a steady flow of quality material, the site’s focus on logic and reading comprehension could help it become a hit at schools nationwide. 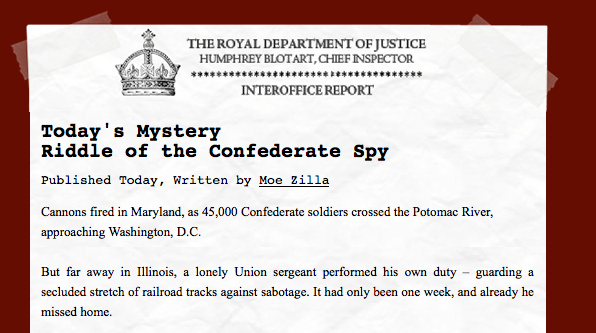