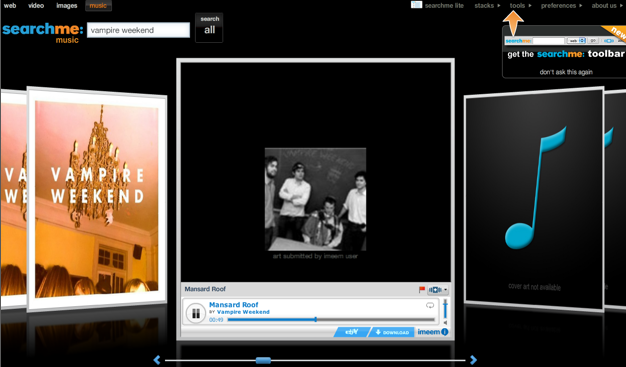 Okay, this has to be the coolest hack of the week. Visual search engine SearchMe has just added a music search tab that brings back results with free, legal, unlimited full-song streams and cover art you can flip through. It’s CoverFlow on the Web. And it actually trumps the experience one Yahoo’s music search, which also offers free full streams through Rhapsody—but those are limited to 25 streams a month per searcher.

SearchMe instead is tapping into imeem’s vast catalog of fully licensed music. (Along with Rhapsody and MySpace Music, imeem is one of a handful of companies with comprehensive music streaming rights from all the major labels). [Correction] SearchMe is using imeem’s API, which originally was limited to apps on imeem itself, but has since been extended to other sites through a widget loophole in imeem’s licensing deal with the record labels. Imeem users can stream any song and create playlists on imeem itself or through imeem’s widgets which can be embedded elsewhere. (Other partners such as Apture and Slide also use imeem’s API to invoke imeem widgets).

SearchMe is essentially grabbing the imeem widget for each song search result. As with all imeem music widgets, there are buttons on the bottom that will let anyone buy the song from iTunes, Amazon, or eBay. SearchMe won’t see any of that affiliate revenue, but if music search gets more people to actually use SearchMe it will worthwhile. The search engine is still tiny, but is gaining some traction (see Google Web Trends chart below).

This is a great way to discover music. You could do the same searches on imeem itself, but SearchMe’s user interface is bigger and beefier. Search for a band like Vampire Weekend (and click on the “music” tab), and all the results play through one after another. You can also create and save your own playlists by creating search stacks. For instance, here is a stack of the Top 10 Billboard songs.

Last week, SearchMe cut 20 percent of its staff (11 people). This week, it is making strides once again to move forward.