The Karaoke Channel, a video on demand karaoke service that is available through cable in 30 million households, is launching its own online karaoke hub. The site offers a catalog of over 5000 popular karaoke songs, including songs available in a number of foreign languages.

If you’d like to try out The Karaoke Channel, the first 500 TechCrunch readers who follow these instructions will be able to access the site for 10 days:

Once registered and logged in, click on MY ACCOUNT (Top right
corner) and enter the promo code in the PROMOTION space (try both codes, each are good for 250).

To gain access to the site’s full catalog, users will have to become paid members. Membership fees run around $10 a month or $100 a year, with a $15 24-hour membership available (the site advertises that these are intended for “karaoke parties”). There’s also a free plan, but this only grants access to 100 of the site’s songs.

For each song that they have access to, users can play back and record their songs through the site’s Flash-based media player. The site also includes community features that allow users to make friends and rate and view the most popular (and hopefully talented) singers.

Unfortunately, the site places a heavy emphasis on becoming a paid member and its sharing functionality is very restrictive. It’s understandable that users are asked to pay for the privilege of using these licensed karaoke songs (which are often expensive to purchase elsewhere), but the site also restricts them from listening to whole recordings performed by other users (you can only hear brief samples). This is especially frustrating when listening to the “Hall of Fame” songs, and only getting 30 second snippets. 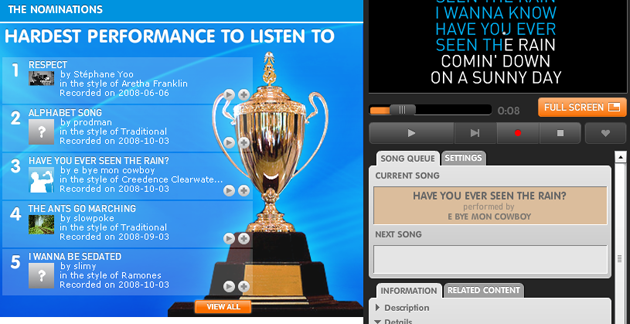 There also doesn’t seem to be any way to share a song with a non-member. Karaoke communities are fun because you get to strut your stuff to a wide audience – if you can’t link your friends (who probably aren’t members) to your performances, the site loses most of its value.

The site plans to integrate more robust sharing in the near future, but until then it will have a tough time competing with other karaoke sites like MySpace Karaoke.