Amie Street, the music store that sells songs on a sliding price scale based on how popular they are, has launched a totally revamped website and new features including a new music player and an enhanced recommendation system. We’ve been big fans since first hearing about them in 2006.

Despite Amie Street’s growing popularity, especially in the indie music scene, the site has long had a somewhat barebones or even amateurish look that was functional but not very visually appealing. The new site is much more professional, with a rotating ‘featured’ panel prominently displaying new releases and promotions, and more intuitive overall design. 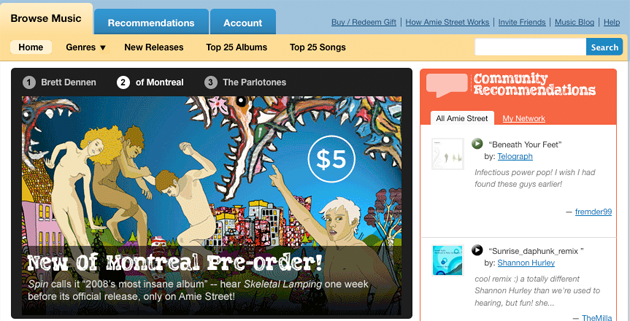 New features for the release include a new music library/player that looks very similar to iTunes. Users can access all music that they’ve purchased through Amie Street and stream it from this player free of charge, from any computer. Users can also browse through the music libraries of their peers, though they’ll only be able to listen to brief previews of songs they don’t own (the company hopes to eventually include full song previews, but it sounds like this is still a ways off).

The site is also expanding its role as a discovery platform, strategically placing recommendations throughout the site. Other enhancements to the site include the addition of wishlist and gifting functionality to the main store.

Co-founder Joshua Boltuch says that site continues to see steady growth, with over 1 million songs available and an increase in paying users of around 18% month over month for the past three months. The new, more professional design can only help this – I expect many of the people who may have been turned off by the site’s former ‘indie’ look will be more receptive to the new version. 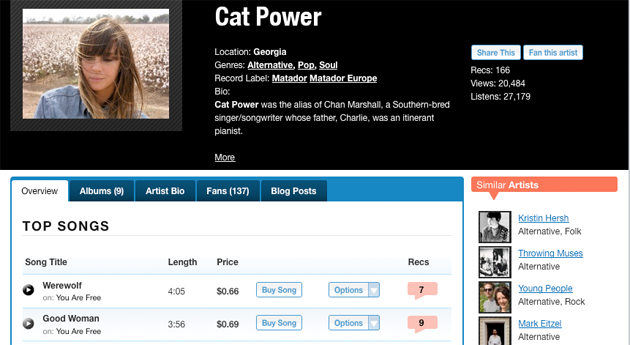