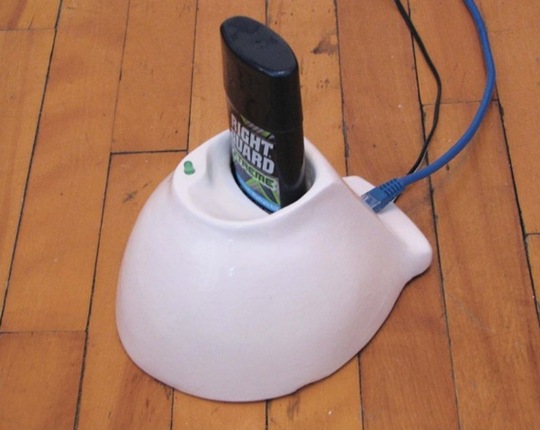 I’d love to be able to say, “Now I’ve seen it all!” and actually mean it, but something even more wonderfully weird than this net-connected deodorant dock will eventually come along and usurp all the bizarre inventions of days gone by.

Today, though, it’s the “Zero Privacy” deodorant dock that takes the cake. It was originally built as a class project by two Canadian college students, Laurier Rochon and Marc Beaulieu, for their Physical Computing and Tangible Media class.

According to the project’s web site, iamclean.org, the whole thing is “a critique of social networking sites and devices.” The Zero Privacy dock works like so…

“I have in my room this beautiful docking station (made of plaster, covered in paint with a shiny coating – made by Marc again) which actually looks a lot like an iPod docking station. It is very curvy, completely white and reminds me a little of an altar, giving the central object a god-like aura. On the other side is a slick little green status LED on the side. But instead of having my iPod or a cellphone charging there, it is actually holding my deodorant stick. I strongly suggest you go to the media section and have a look at it.

Every time I take the deodorant out of the docking station, the status LED goes on, and the installation knows I’m applying deodorant on. After a dozen seconds (usually) I’m finished, and put the deodorant back in its neat little slot. At the back of the installation, there is an RJ-45 (Ethernet, or Internet cable) jack, which lets me to plug it into any router or internet source. This allows the information to be sent out to my website instantly, where a live visualisation makes it available for the whole world to see which days I have put deodorant on, and for how many seconds (click on the "launch" button on the main page). You can also search for a certain date, and reorganize the days as you please.”

Here’s a screengrab of the data that’s gathered. 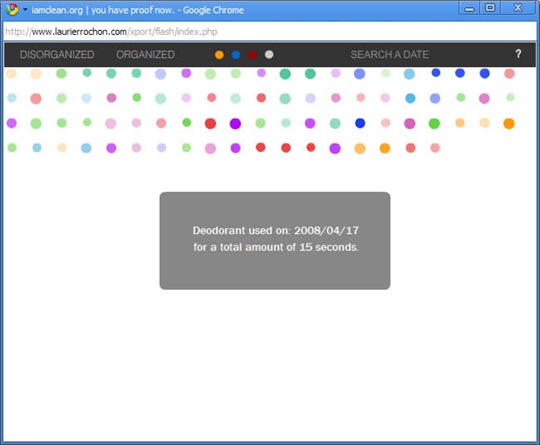 Pretty good stuff. Apparently, there might be a wireless version in the works too. As odd as this sounds, think about devices like these that could help parents monitor their kids. Not necessarily deodorant docks, but maybe docks for things like toothbrushes and remote controls. Or maybe a big toy chest that monitored how often toys spend inside it versus how long they’re outside and all over the floor.

[iamclean.org via Make via Ubergizmo]