When you are suffering from a chronic disease, sometimes the only people who can understand what you are going through are other people with the same condition. But when that condition is rare, it can be difficult to find them. WeAre.Us wants to help. It is a platform of 16 social networks that connect people with chronic illnesses. And it just launched a revamped version (which mainly features an improved user interface). The site entered the crowded health 2.0 market last April, but stands out with its focused internal framework and commitment to supporting the patients who use it.

In contrast to health platforms like DailyStrength or Revolution Health, which serve as a contact point for health-related topics of any kind, WeAre.Us connects people affected by severe illnesses only. In that sense, it is more like PatientsLikeMe.  But rather than create an all-encompassing site, WeAre.Us decided to take more of a niche social network approach.

Given that these patients deserve special attention, the company decided to set up separate sites with individual domain names. The subsites, such as WeAreFibro.org (for users suffering from fibromyalgia, a chronic pain disorder) or WeAreCrohns.org (Crohn’s is a gastric disease), run on the same core engine but are independent from each other.

WeAre.Us tries to avoid Ning-like scattering effects by allowing users to create communities only if more more than 1,000 members can be expected. CMO Robert Patterson says another differentiator is the active, individualized support the company provides all WeAre.Us members.

The approach seems to work: While Ning has over 50 Crohn’s-based (mostly inactive) micro social networks, for example, WeAre.Us’ single Crohn’s community boasts over 2,000 members. One weakness is the lack of a cross network ID and profile system (such as that used by Ning).  But according to Patterson, demand for such a system is so far almost non-existent.

The site’s 16 social networks are being monetized by a full sponsorship model (one sponsor per site per month) and a lead generation system: WeAre.Us collects anonymized health data from its users and passes it on to pharma companies, which can cut costs on recruiting suitable patients for clinical trials.

WeAre.Us’ strategy of self-controlled sites, vertical focus, unique branding for each interest group, and human-powered user support is paying off so far: The user base, while still small, currently grows 35% month-over-month (expecting to pass the 10,000 member mark this month), with each member spending two hours on the site per visit.

WeAre.Us will also soon officially announce it took the first prize in the premiere VenCorps Community Driven Capital Contest ($50,000 in cash and accolades), which is backed by New York-based private equity firm Spencer Trask. (VenCorps, for those who follow these things, is what emerged from the now-defunct Cambrian House). 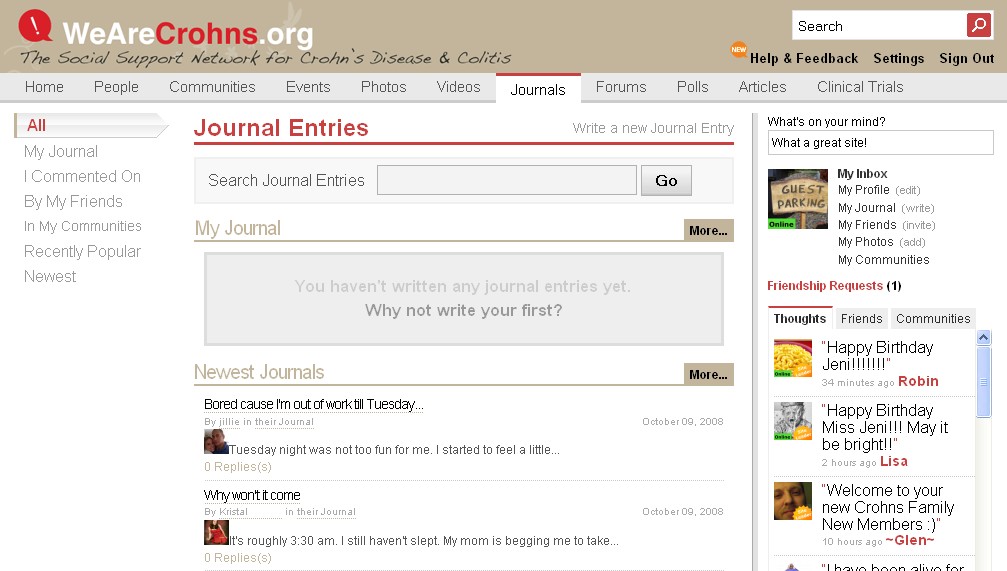