Since the launch of the iPhone App Store, we’ve seen a wave of geo-aware social networks that make use of the phone’s GPS (or in the case of the original iPhone, pseudo-GPS). Each of these apps aims to help facilitate social interaction by locating nearby friends, points of interest, or people you might be interested in meeting (but might not know yet). There’s little doubt that some incarnation of one of these apps will help shape the future of social networking, but there’s still a huge geo-aware market that has yet to be tapped: Games. 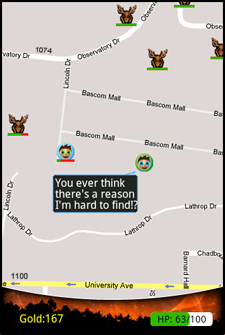 Parallel Kingdom, launching at the end of the month, is set to become one of the first massively multiplayer online games (MMO) to hit the iPhone platform and Android platforms (both platforms will share the same in-game network). MMO’s have been tremendously popular on personal computers with mega-hits like World of Warcraft, and have proven to be lucrative with subscription models that feed off their addicting gameplay. Parallel Kingdom is hoping to take this success to a mobile platform.

At first glance, Parallel Kingdom doesn’t seem very impressive – at least from a visual stance. The game’s interface consists of basic sprites that are overlaid on top of a Google Map. Each icon depicts a player character, an enemy, or an item. But while the game could use some drastic graphical modifications (especially given the 3D games already available on the iPhone), the technology and concept behind it is where the real excitement lies.

The game uses your phone’s GPS to detect your movement across the map, and each change in physical location corresponds to a change in the game’s location. For example, our local Starbucks might be shown to be infested with monsters, but a drive down the street may reveal an area loaded with riches and friendly characters. And while the game uses physical location to determine your in-game location on a macro-level, you’re still allowed to move within a designated area without having to leave your seat (you could explore a few blocks around your workplace without having to leave the office).

For now your actions are pretty limited: you can pick items (like weapons or gold) off the ground, talk to people, and attack things. The game currently lacks a skill or level system, so all combat is dictated by how much you’ve upgraded a weapon. This may be fun for a while, but the game won’t be nearly as addictive as World of Warcraft until it implements more advanced leveling systems, giving users an incentive to play more often (the game’s Director Justin Beck says that these features are on the way). The game is going to be free at launch, with plans to release a subscription based version in the future once the game’s feature set is more fleshed out.

I think Parallel Kingdom and similar games have a chance to be huge – perhaps even more popular than the social networks described above. While geo-enabled social networks may be fun for networking and dating, many people will probably only use them casually. Online games have the potential to be much more addictive, and lucrative (most games can charge around $15 a month). That said, I think if Parallel Kingdom is going to be the game to really break this market open, it will need to adopt an entirely new graphics engine that can leverage the iPhone and Android’s power to display the 3D graphics these gamers are accustomed to.