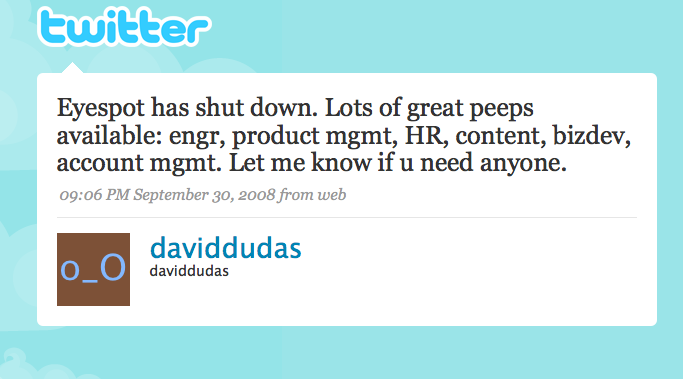 For startups without a warchest full of cash, times are about to get very tough. The latest to hit the deadpool is Eyespot, which announced its demise not with a press release, but with a Twitter from co-founder David Dudas stating simply:

Eyespot raised $3.7 million way back in October, 2006 for its Web-based editor that makes it easier to create video mashups. But the Web video editor space soon got crowded, and there are only so many buyers. (Yahoo eventually acquired competitor JumpCut, for instance).

One tipster tells us that Eyespot was on the verge of selling itself, but the M&A deal fell through at the last minute. With no cash left, the company had to shut down and let all 22 of its employees go on Monday. The site, though, is still up. Anyone in San Diego looking to hire should contact David Dudas.