Facebook may be the world’s largest and fastest growing social network, but apparently Germany remains a tough market to crack for the company. The site is just ranked 19th on Alexa’s Top 100 list for this country, ten positions behind StudiVZ, its local clone. While Facebook currently has a German user base of 800,000 (according to the site’s ad placement tool), StudiVZ boasts a membership of over 10 million, making it the largest social network in the German-speaking world. Facebook has been available in German since March of this year and reportedly grew by just 200,000 members since then. Comscore numbers suggest that number might be higher (see below).

Even assuming StudiVZ doesn’t get anymore new users, it would take Facebook over 20 years to catch up at this rate of growth. In Germany (where I hail from), organic growth doesn’t seem to be an option for the company and it seems Facebook understood that reality: After taking action in July (when StudiVZ was sued for infringing Facebook’s “look, feel, features and services”), Facebook is now taking another (quite unusual) stab at its clone by partnering up with Smaboo, a Zurich-based promotion agency.

On its web site, Smaboo is currently calling for so-called Facebook “ambassadors” who will help organize Facebook parties in Berlin and Munich. In October, the first 200 German ambassadors will be invited to a kickoff event and later engage in a “Berlin vs. Munich battle” to decide which city rules by recruiting more new Facebook members. (The German capital has a population of 3.5 million, while there are about 1.35 million inhabitants in Munich). Smaboo says ambassadors can win non-cash prizes such as iPhones, Wiis or an internship at Facebook’s HQ in Palo Alto. All they need to do is rate their determination to recommend a Facebook membership to their friends on a scale from 1 to 10 and state what they like about the site. Smaboo claims in the company blog it’s the first time Facebook is running a campaign of this kind.

What’s almost as noteworthy as the campaign itself is that this user-acquisition strategy is actually a clone of the one StudiVZ pursued during its early days: In 2005/2006, StudiVZ identified particularly enthusiastic users on their site and recruited them as so-called campus captains (StudiVZ means “university student directory” in German), evangelists who actively approached fellow university students to get them to sign up.

Although both the Facebook and StudiVZ initiatives are based on the idea of human-powered and offline viral growth, there are a number of differences: The German site never revealed the exact number of campus captains but said they never received any kind of payment for their work (apart from StudiVZ swag). In addition, Facebook’s ambassador program has an artifical flavor to it, with an outside party running a professionally organized campaign. Also, in the course of imitating Facebook’s success story, StudiVZ limited its platform population strategy to universities before opening up to the general public at a later time (Smaboo asks for the name of the university the applicants attend but doesn’t verify the given information at the time of submission).

Facebook saw its number of unique visitors in Germany jump from 545,000 last March to 1.8 million in August this year (a 224 percent increase, according to comScore). During that same time period, StudiVZ grew from 6.5million uniques to 13.7 million (a 110 percent increase). Facebook still trails far behind. Will this locally limited experiment (which might be repeated in other cities and even countries) lead to a significant jump in Facebook’s German user base in the months to come? 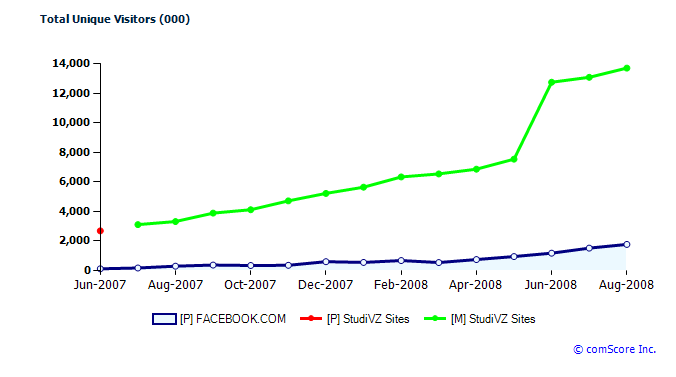 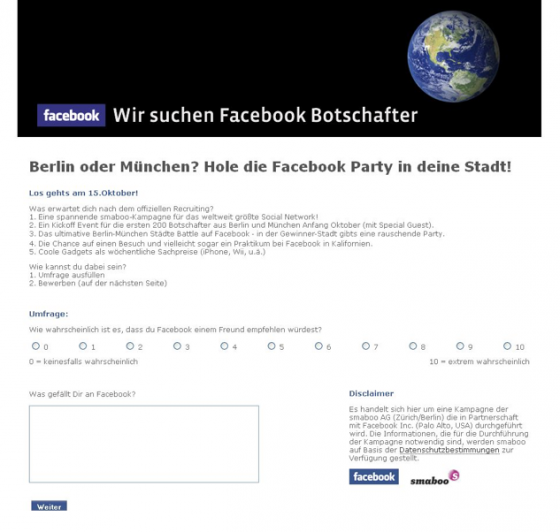