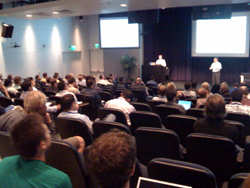 Today TechStars held its third Demo Day, offering a dozen of its startups the chance to display their wares in front of a throng of investors and the media. TechStars is a seed stage investment fund similar to Y Combinator and DreamIt Ventures that gives startups a modest amount of cash (around $5,000 for each founder) and a three month mentorship in exchange for a 5% equity stake in the company. Every year TechStars chooses ten companies from hundreds of applicants to take part in the program. Some of these companies have presented before at last month’s Demo Day in Colorado or in last year’s presentation.

Included in the days festivities were announcements that two TechStars companies have been acquired: madKast (by ShareThis) and IntenseDebate (by Automattic, the maker of WordPress). After AOL’s purchase of SocialThing! in August, that brings the acquisition total from TechStars’ first class to three (of ten graduates). Not too shabby.

Devver offers a suite of development tools in the cloud that allows developers to run time intensive processes on remote server farms, which it says can improve productivity by 75%. The company is currently focused on the Ruby programming language and automated testing tools (which is says have a multi-billion dollar market), and plans to expand to more lanugages and applications.

Foodzie is an online marketplace that allows artisan food producers to sell their goods in customized mini-stores as part of the Foodzie network. By connecting these stores together, these artisan producers get more exposure than they would otherwise. The site also makes it easy for vendors to quickly change prices or adjust product selections. Foodzie allows producers to keep 75-80% of their revenue, as compared to around 40 or 50% for producers selling through traditional food stores.

Travelfli is an online management system for Frequent Flyer Miles and other rewards programs. After inputting their credentials, users are able to view the number of miles they’ve earned and when they expire at a glance (you can also enter information by emailing in confirmations sent by the airlines, much as you would with TripIt). The site also can monitor airline ticketing systems for openings of “Rewards seats”, and can also suggest when it might not be a good idea to apply Frequent Flyer Miles towards a particular flight.

Ignighter is a group dating site that looks to offer an alternative to one-on-one dating sites like Match.com and eHarmony. The site asks groups of friend to collaborate on a group profile, which displays interests, personality types, and photos of group members. Users can then browse through other groups in their area, using messages or a Wall feature to set up a date (they can also set up a mass invite, notifying multiple groups where they plan to hang out that night). Also see Mixtt, which launched at TechCrunch50.

Gyminee is a fitness tracking application merged with a social network. Users can share their current exercise progress with friends with visually appealing graphs, and can hold friendly competitions (for example, a group of friends could challenge themselves to see who could run the most miles in a month). The site also gives users access to training programs, complete with videos demonstrating how to perform each exercise. As part of the site’s premium features, users will be able to access meal plans (complete with nutrition information on over 50,000 foods) and custom tracking options. Also see Fitbit, a fitness oriented site that launched at TechCrunch50.

IntenseDebate is an enhanced blog commenting system. Today the company announced that it has been acquired by Automattic.

Artist Exploder offers a Facebook application that aims to help musicians transition from MySpace, where they may have established a sizable fan base, to Facebook, which has less of a musician presence. The application allows users to download free songs in return for exposing their friends to musicians, which helps artists expand virally. The application also allows musicians to selectively message specific users (for example, I could send a message to everyone in LA that I have a concert at The Roxy tonight).

Brightkite is a location-based social network that claims to be seeing faster growth than competitors like Loopt. The site allows users to update their position through a number of devices including mobile phones, and can generate a stream of all activities that occur in a given place. Users can choose to either use the service to only find nearby friends, or they can set their data to public so they can meet new friends in the vicinity.

Occipital is creating image software that combines elements of image recognition and tagging to create what it hopes will become the next step in image processing software. The software can try to infer location tags on photos haven’t been properly tagged by using data from other images as well as landmark recognition. Occipital is also using the image recognition to use objects as “links” through different photos – for example, I could click on the cover of a book in a photograph to see a listing of other images containing that book. Finally, the software can be used to generate 3D worlds from static photographs, much like those seen on Microsoft’s Photosynth.

App-X is an enterprise software suite built on the Salesforce Platform at Force.com that aims to help fund managers keep better track of money, deals, and other aspects of their trade. The site is aiming to spread through word of mouth in the investor community, with a stated goal of around 100 customers in the space (which it says would actually make it a very substantial player).

EventVue creates social networks based on conferences and events. Because networking is such a valuable component of these conferences, many people would like to see who else will be attending. Users can tag themselves with their companies, job titles, and other criteria, which can help facilitate personal interaction once the conference arrives.

Widget-maker madKast announced that it will soon be acquired by ShareThis.