Checking back in Google Analytics to see how Google Chrome usage is trending now that the browser has been out in the wild for two weeks. A couple of days after launching on September 2, 6.23% of visitors to TechCrunch were using Chrome. Today usage is up to 8.12% over the period since launch. (It may soon overtake Safari, which is at 8.84%).

Unlike our first measure, where Chrome usage seemed to be taking away from IE browser share (Firefox usage was actually up), this time Firefox is down nearly 7 points, and IE is way up. I’m surprised that Chrome usage remains so high. When we first measured it a lot of people were still testing it out. But they are continuing to use it two weeks later, which suggests they like it. A lot. And only 77% of our readers are coming from Windows machines – as Chrome expands to the Mac and Linux platforms usage will certainly increase further.

Here are the current stats. And a bonus chart – I hadn’t noticed that iPhone users made up over 1% of total TechCrunch traffic as well. 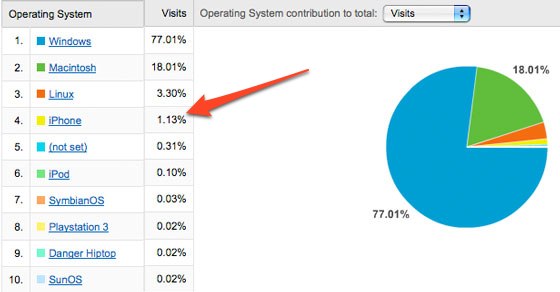