Atmosphir is a gaming platform and engine that allows users to easily create their own levels in a 3D world by painting basic elements into a three dimensional grid. After downloading a client application, users can play in their own levels, or they can visit the Atmosphir community website to play on any of the maps that have been uploaded by other users. The application is currently available in a limited beta with plans to release by the end of the year, and is available for both Mac and PC. 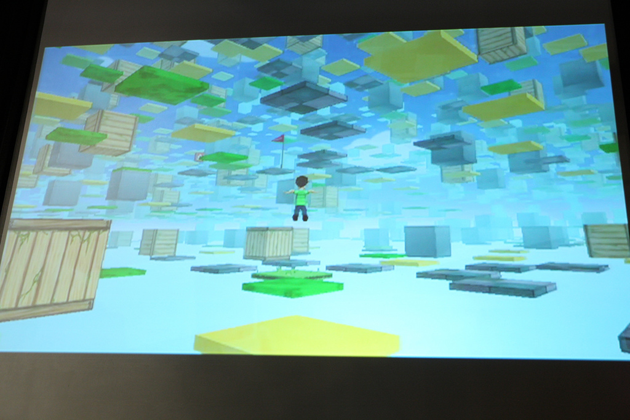 Users can choose from a number of palettes, including pieces of land, bridges, and hazard props that will threaten the in-game avatar with blazing fireballs. The application also includes a number of theme packs, which allow users to create some variety in their levels. The packs are currently pretty basic, but the site plans to release more exciting themes like “Pirates” and “Robots”.

As far as gameplay goes, Atmosphir seems to be very straightfoward, much like a standard “Mario Brothers” game. The player’s avatar can run and jump around each level, which allows for jumping puzzles and the stomping on bad guys, but that’s about it. Atmosphir says that the current iteration is just a foundation, and that it plans to implement far more functionality including multiplayer support, which it says it can seamlessly push to every user’s client through an integrated updating system.

Atmosphir presented during Session 10 of the TechCrunch50 conference. You can watch its stage presentation and read the expert panelists’ reactions below.

Bradley Horowitz – It’s impressive. Are the games suitable to play on game consoles?

Atmosphir – Definitely, I was always into Nintendo (they’re looking at getting onto gaming systems, like the Wii)

Atmosphir – We built an abstraction layer that makes it easy to port to different systems, port to Sony PSP, we’re testing for the iPhone.

Bradley Horowitz – I can see a business model where I make a game and there’s a rev share.

Robert Scoble – Is making level collaborative? I’d like to collaborate with my son.

Atmosphir – Yes, you can collaborate. Right now you take a file, send draft back and forth.. eventually would like to design in same environmental, can also upload with edit unlocked tag.. Levels are small files, only around 100k for a large level.

Robert Scoble – are blocks interactive? Can you make it play audio when you land on a block?

Atmosphir – Right now there are interactive things we’re working on.. some blocks shoot you up. we’re looking at doing audio stuff.

Joi Ito – How big is the client?

Joi Ito – Seems like tradeoff between user scriptabillty and blocks. Running from start flag would get kind of boring… are you going to have just one category of users.. User game play… it’s going to be a weird problem.

Atmosphir – We’re interested in when people mix roles of games and genres.. We want to mix it up.

Atmosphir – We want to keep it family friendly, maybe we’ll have more mature themes. For right now we’re taking a Nintendo approach… But a rocket launcher is on the way.