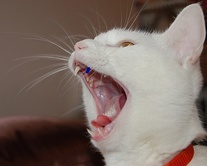 ABI research analyst Douglas McEuen believes that a new technology named “Blued Tooth” will become an important part of the technical landscape between now and 2050. The new standard, released by Nokia and named after a Finnish pirate, adds wireless connectivity to many devices includes “cellular telephones,” computing devices, and potentially pocket televisions, calculators, and future personal data devices AKA PDAs.

The market for Mobile Internet Devices – the new class of Internet-connected products offering “always-on” Web browsing, photography and video, navigation, games, social networking and voice communications – is forecast to grow at a spectacular compound annual growth rate (CAGR) of 167% over the next five years.

That impressive growth will be paralleled by the penetration of several wireless technologies that are integral to the MID’s functions: Wi-Fi, Bluetooth, and eventually ultra-wideband (UWB).

Sorry. In all seriousness, this is flawed. I would say the growth is fractionally paralleled at best.

That’s right, friends: It’s the old “If you sell a lot of rackets you better start investing in balls because demand can only go up” economic argument. Sadly, Mr. McEuen forgets to note that for every solid computing device sold – a laptop, PC, or MID – you get maybe one or two accessory purchases. When is the last time you bought something for your laptop? Your iPhone? Probably once, when you were in the store. Clearly we’re talking about different markets here, but ABI Research is still ready to sell you their research, so head on over.