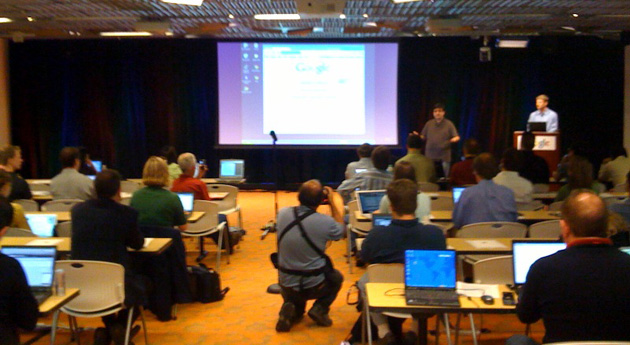 The world was introduced yesterday to Google’s new browser, Chrome, via a comic book. Today, Google is holding a press conference at its headquarters in Mountain View to demo the new browser and discuss the reasons behind its development.

If you’re interested in reading the comic released yesterday that introduces Chrome, you can find it here.

Below are our notes from the conference, which started at 11:00 am PT.

You can now download Chrome (just under half a megabyte; Windows only) from here.

Tabs are going to be the primary elements of Chrome. They are like title bars for webpages and applications. They can be dragged around to reorganize (as in Safari) and can even be dragged out of a window to create a new one.

Google Chrome has no search box – instead it has an “omnibox” where you both enter website addresses and conduct searches. It sounds very similar to what can be found in Firefox 3.

Google is turning away from the typical homepage (which makes us wonder – what about iGoogle?). Your default homepage is a list of your most visited sites, each accompanied by a screenshot.

A download bar will create a bucket at the bottom of your browser window where all downloads go. You can drag each file from the bucket to where you want on your desktop. It’s meant to prevent the loss of files that you’ve downloaded because you don’t know where they went.

Some applications, like Gmail, want to break free from the browser window. Gmail could use shortcuts on the desktop and in the start menu, for example, so it can be launched like a real app. A special app view window in Chrome doesn’t have typical browser controls, just the web app itself.

Google Chrome has reportedly been in development for two years and will release in more than 40 languages today in beta.

A task manager for the browser itself will let you see how much CPU is being used for Flash and other plugins on the sites you visit. When a browser tab hangs, you can use the manager to kill that single tab. This preserves the page and the position of the browser when you reopen it.

Google has chosen Webkit because it’s fast, open source, and they don’t want to force developers to learn another rendering engine. A rendering test of static content resulted in 220.64 ms in IE and 77.28 in Webkit.

Chrome’s new JavaScript engine (V8) efficiently handles hundreds of kilobytes of code, as found in applications like Gmail. Google has found a way to introduce so-called “hidden classes” through a virtual machine. The classes are used within the native code that it compiles. They are supported by inline caching and dynamic parsing, so the access of data and execution of functions are really fast.

Even though Webkit already had a JavaScript rendering engine, Google wanted to set a new bar for virtual machine performance within the browser. The team behind V8 is Danish. In speed tests, IE performed at 15.5 round trips per hour (RPH) and Chrome performed at 584 RPH.

Other browsers can take V8 and include it in their systems, because it is being provided as open source.

Chrome has no tie-ins to other major Google services. If you had Live Search as your default search engine in Internet Explorer, Chrome will use that automatically. 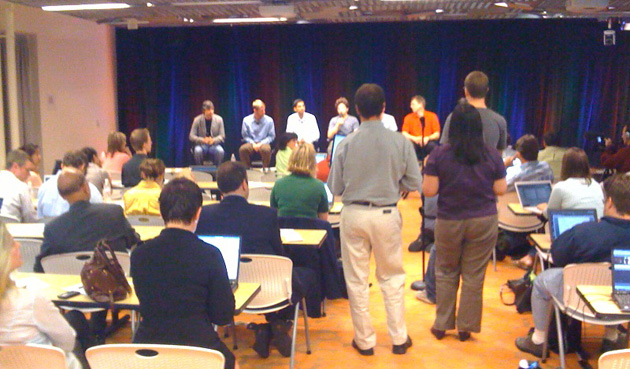 Larry Page is here saying he’s been using Chrome for awhile now. He says Google wants a world where platforms are advancing and the open source model allows for this. Mozilla can choose to take some of the advancements Google has made and incorporate them into its own Firefox browser.

When asked how Chrome fits into Google’s mobile strategy, especially with Android, the company said Android has a separate browser (which is also Webkit based) but that both browsers share underlying technology. The two basically only differ in their user interfaces.

Sergey Brin: “I would not call Chrome the operating system of the web application – it’s basically a very fast engine for them”

As for plugins, Chrome will support plugins like Flash and PDF but it doesn’t have extensions like those found in Firefox. Google does, however, plan to provide an extension API in the future.

Chrome is very small, about 7 megabytes in size.

When asked about gaining marketshare, Google representatives say they don’t have a target number for what they hope to achieve. They say they want “a diverse ecosystem” of users.

When asked why consumers should use Chrome, they say it’s attractive if you want a “faster, more robust, safer web experience” (yawn)

Google reps are admitting that they have to compete with a product that’s given away by default on almost every computer. When asked whether they have been worried about IE7 or IE8, Google responded by saying they started two years ago and have always wanted to provide consumers with a choice.