MultiTouch, a company specializing in, you guessed it, multi-touch technology, today launched the world’s first modular multi-touch LCD screen, which will allow owners to create screen tables and walls to their desired size.

Dubbed the MultiTouch Cell, each LCD screen unit is available in both 32- and 46-inch sizes and offers Full HD capability. The Cells can be positioned in portrait or landscape modes and can be turned into huge multi-touch screens or a multi-touch coffee table for those who don’t need something so grandiose.

The MultiTouch Cell is the company’s response to Microsoft’s Touchwall, which we wrote about earlier this year. Touchwall uses three infrared lasers that scan a surface, and a camera, which feeds information back to Microsoft’s Plex software after something breaks through the laser line. In contrast, the MultiTouch Cell uses an LCD display and according to the company, bests current projector-based systems by improving durability — MultiTouch claims users will get 50,000 hours of use compared to 3,000 hours for projector-based offerings — as well as improved image resolution, contrast, and color quality. 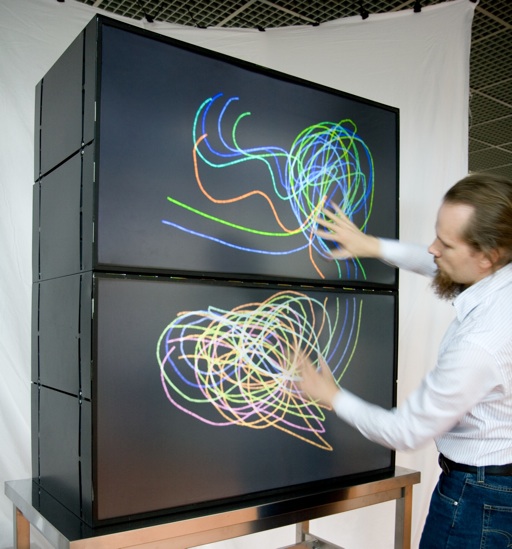 Depending on their needs, MultiTouch customers can buy dozens of LCD modules and arrange them in any way they wish without worrying about connectivity. Each LCD module features HDMI, FireWire, and USB ports and can be connected to a Mac, Linux or Windows computer, meaning each screen in the setup can display one large image or something different.

Although MultiTouch uses LCDs instead of projector technology, owners won’t save any money buying a MultiTouch system. The company’s 46-inch offering costs almost $16,000 with a fully-configured Linux PC to run the software, while a 46-inch display without the PC will cost about $14,700 per unit. 32-inch displays with Full HD capability cost about $8,300 with the Linux PC and almost $7,200 without it.

Ever since Microsoft announced its Surface computer, which currently retails for about $10,000 and can be found in some AT&T stores, more companies have jumped on the multi-touch bandwagon. But so far, development costs are extremely high and companies haven’t been able to bring prices down to an affordable level for consumers. For its part, Microsoft claims the Surface will be available to consumers in 2011, but I wouldn’t hold my breath.