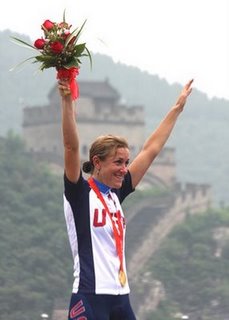 Google Earth is getting a nice plug from Olympic Gold Medal cyclist Kristin Armstrong. When she did her time trials in December, 2007 in China, she took along her husband’s GPS unit to capture the elevation along the route. Then she used that data to find the best training route back home. In a guest post on the Google Lat-Long blog, she writes:

After returning home to Boise, Idaho, I exported the GPS data to several different formats, one of which I was able to launch with Google Earth. I was then able to trace the entire course from the comfort of my home half a world away and find a similar route to train on back in Boise. This capability along with having the elevation profile proved invaluable in my preparation for my Gold Medal race.

Google proves that once again, information is a competitive advantage.