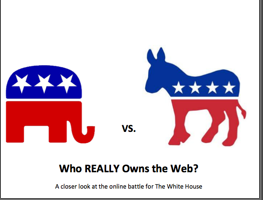 Who is doing a better job of getting his message across on the Web: John McCain or Barack Obama? Conventional wisdom says that it is Obama, whose performance on the Web has been strong since the beginning. And conventional wisdom is still correct when it comes to blogs and social networks. But a new study by Attributor that is being released today shows that McCain is actually leading on mainstream news sites and catching up on blogs, especially as he and his supporters have been increasing their attacks on Obama.

Attributor captured the candidates’ official speeches and position statements from the campaign sites, www.johnmccain.com and www.barackobama.com, and then scoured more than 25 billion pages on the Web to see where those words reappeared. In general, Obama’s message continues to resonate more overall, but just barely. Attributor estimates that Obama’s message was picked up on Websites that drew 38 million pageviews over the past two weeks, compared to 36 million pageviews for Websites that picked up McCain’s message. This represents a 10 percent surge by McCain. 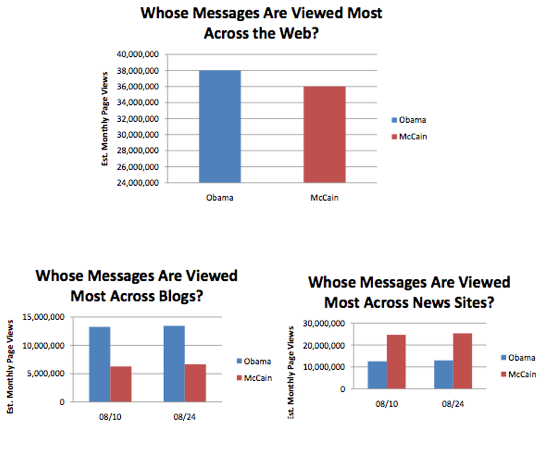 In general blogs still favor Obama by about two to one, but the opposite is true for traditional news sites. McCain’s speeches and position statements appear on traditional news sites 80 percent more often than Obama’s. And on the sites of the major TV networks (ABC, CBS, NBC, and Fox), McCain has a 3 to 1 advantage. (This ratio should come down with the Democratic convention this week). 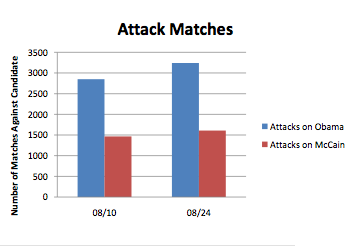 What is behind McCain’s surge? One factor is negative attacks on Obama, such as the Paris Hilton ad or John Corsi’s propaganda book. Over the past two weeks there have been twice as many attacks on Obama’s positions than on McCain’s, and those attacks were seen 2.8 million times so far in August versus 1.1 million views for attacks on McCain. (Attributor’s technology can identify negative or positive words). And it is not just the traditional news media that is eating up the attacks. Bloggers love them too. As the attacks have increased, so have blog matches citing McCain’s positions. In the past week, 350 new bloggers wrote about McCain’s views, marking the first time that McCain gained more new blog coverage than Obama (who picked up about 250 new bloggers). Going negative works. 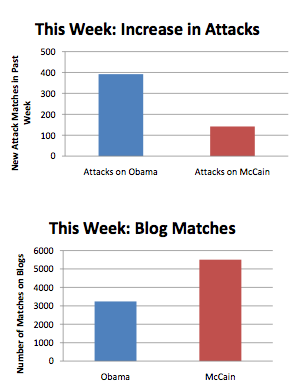 A deeper dive into the data confirms another obvious conclusion: Obama has better speech writers than McCain. Two thirds of the Obama citations across the Web come from his speeches as opposed to his issue papers and position statements. For McCain, 55 percent of his messaging being picked up elsewhere comes from his position statements.

The single topic for each candidate that resonated the most across the Web over the past two weeks was the economy, which for Obama overtook Iraq as a hot-button issue for the first time. The most popular speeches for each candidate was McCain’s Energy Security speech, and Obama’s Berlin speech (which has gone viral and has been viewed more than an estimated two million times).