Facebook is a famously difficult place to make money. Despite the popularity of the social network, most ads go for pennies per thousand impressions (CPMs). Even Social Media, a Facebook ad network that is able to get effective CPMs of about 50 cents, has only paid out a little more than $8 million total to application developers since it launched a year ago. Yet AllFacebook claims:

There’s a pretty well known secret among top Facebook application developers: one developer is generating over $1 million a month. Who is that developer exactly? Well, most people won’t talk about it and after some prodding around we’ve narrowed down the suspects. We aren’t going to post them though because ultimately it doesn’t matter who the individual is.

Excuse me? Actually, it does matter who this mystery million-dollar-a-month Facebook developer is. Facebook apps that make real money are few and far between. It is important for anyone creating such apps to know which models work and which ones don’t. Nick O’Neil at AllFacebook should understand why his readers would want that information, even if his sources would rather that he keep it to himself. It is also important to know who it is in order to try to test the claim.

As it so happens, I’ve heard this million-dollar-a-month claim before. It came from Anu Shukla, the CEO of Offerpal Media, a lead generation network for Facebook apps that gives users a way to earn virtual currency by looking at an ad and completing an action (such as filling out a registration form). O’Neil also points to Offerpal in his post, noting that it can generate average CPMs of $75, with some as high as $200,

When I interviewed Shukla earlier this summer, she told me that about 200 apps on Facebook and elsewhere are tying their virtual currency to Offerpal and that “there are publishers earning up to $1 million a month with a single app.” She also said that 80 percent of the top 25 apps on Facebook are using Offerpal.

Friends For Sale! is one of them. This app lets you “buy and sell your friends as pets” and includes a virtual gift shop as well. It boasts 4.5 million monthly active users, making it one of the biggest apps on Facebook.

Could it be the million-dollar app? I don’t know for sure (Shukla wouldn’t say—if you have a better guess tell me why in comments). But let’s run some numbers and see if it makes sense. While Offerpal’s CPMs are high, Shukla said that only a small fraction of any given app’s users—typically only 5 to 10 percent of active users—will look at Offerpal’s CPA ads.

That’s within the realm of possibility. Just barely. I guess some people will do anything for money, even if it’s not real.

Of the 200 social networking apps that tap into the Offerpal network, Shukla told me the median app was collecting $150,000 a month in revenues. That suggests that Offerpal is paying out more per month to developers than the $8 million Social Media has paid out over the past year.

It also suggests that creating a virtual economy inside Facebook could be more lucrative than plastering it with generic ads.

Update: Another strong contender for the million-dollar app is Mob Wars (2.5 million active monthly users, we’ve heard from several sources, as has VentureBeat, which explains:

In the game, a would-be mafioso starts off as a petty thief and must work his way to the top of the crime chain, earning points by fighting opposing gangsters, doing jobs, robbing stores and casinos and exploiting underlings. The player can improve his character by spending these points on better guns, real estate, loyalty and more, and while he could spend an eternity building up enough points to become a serious baller, he can also spend real cash to jumpstart the process. 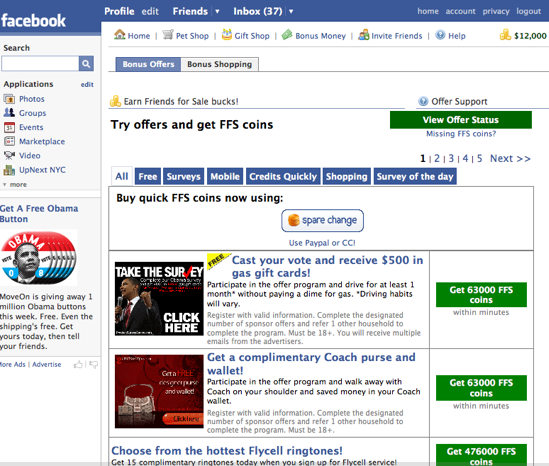