Over the next week, Google will finally be implementing Google Suggest, its auto-complete for searches, on its homepage at Google.com. The service allows users to see the most commonly searched phrases after entering only a few letters, helping users cut back on typing time and check for spelling errors. If you’d like to try the service out now (it isn’t currently activated for everyone) you can find it here.

According to the company’s blog post, the feature has been a long time coming, and has made its way across much of the Google empire already:

“The Google Suggest feature originally started as a 20% project in 2004, and has since expanded to Google Labs, Toolbar, Firefox search box, Maps and Web Search for select countries, the iPhone and BlackBerry, YouTube, and now Google.com.”

Similar search autocomplete can be found on a number of major competitors, including Yahoo and recently-launched (and much hyped Cuil). 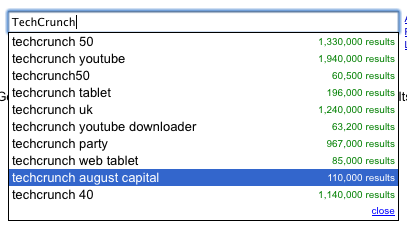