Later this evening Songbird, the open source web-integrated media player, will the unveil the .7 beta release of its software that introduces scrobbling to Last.fm, speedier track importing, and a more polished interface among a number of other features. The resulting application is a marked improvement over the last release we covered, but still has a few rough edges that continue to make it ideal for early adopters in the music scene rather than the general consumer.

Songbird is looking to provide users an alternative to the closed, DRM-laden music stores offered by Apple and a number of other companies. The software behaves like a mix between iTunes (it now features nearly identical icons) and Mozilla’s Firefox (it uses the same engine as the web browser). The software also supports plugins for portable devices like the iPod, and even slightly modified Firefox extensions. The result may be a bit confusing at first, but the interface is familiar enough that it only takes a few moments to adjust to combination.

Songbird allows web developers to integrate a very professional music store on their sites by tapping into the application’s API. After browsing to a supported site, Songbird will display a list of available songs at the bottom of the application in a manner that is strongly reminiscent of iTunes. While we’ve seen other interfaces that look equally professional, replicating the iTunes UI which users are already familiar with is likely to help boost sales. 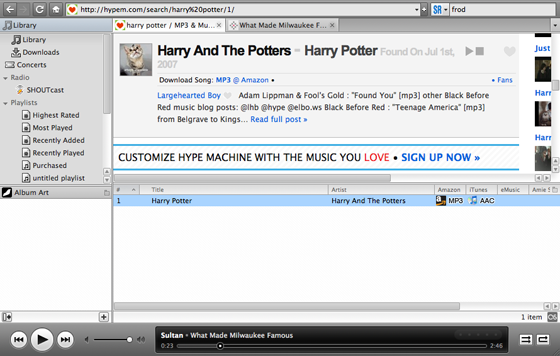