Medialets has posted the results of a recent Goldman Sachs Global Investment Research report that details the breakdown of the first 1 million iPhone 3Gs sold worldwide.

Earlier this month Apple announced that it had reached the milestone in only three days, compared to 74 days for the original iPhone. Of course, the two figures are hardly comparable, as the the 3G version launched simultaneously worldwide in 21 countries – the original iPhone was exclusive to the US for months after its release.

Unsurprisingly, the report says the United States accounts for 60% of all units sold during the three day period, with a total of 600,000. Trailing by a factor of nearly ten fold is Japan, with 70,000 units sold. Japan’s finish in second place may well be a result of pent up demand, as the original iPhone was never officially sold there (even unlocked phones wouldn’t work, as the original iPhone doesn’t support UMTS). 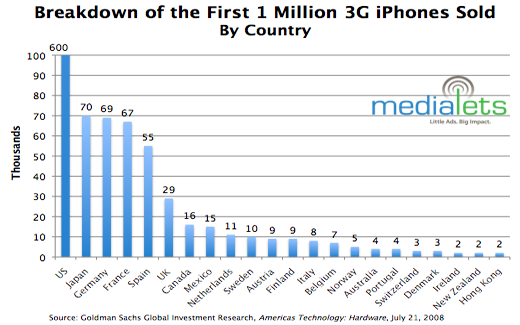 The results for carrier distribution aren’t particularly surprising, either. AT&T leads by a wide margin because of its US sales. Despite selling the second highest number of phones, Japan’s carrier Softbank ranks behind T-Mobile and Orange, which both have customers in multiple European countries. 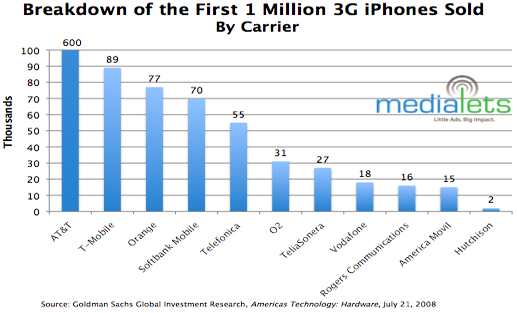 Above all, the figures reflect the explosive demand for the iPhone seen worldwide, and are especially impressive given the difficulties Apple had with activation in a number of countries. In the United States, the iPhone is still selling out at many stores in a manner of minutes. What remains to be seen is how long the public’s obsession with the iPhone will hold, and if Apple can reach its goal of selling 10 million iPhones in 2008.