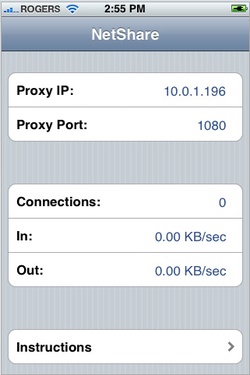 You can now grab Nullriver’s NetShare app, which lets you browse the web from your computer using your iPhone’s data connection , from this direct link. You’ll probably want to grab it quickly, as Apple may well pull it down again. Note: You need to use the direct link, the app isn’t showing up in search results.

Last night Apple posted the application to its App Store, but quickly pulled it down after only around 20 minutes. The application lets users of both the original (EDGE) and 3G iPhones browse the internet on the go wherever their cellular network has coverage.

Many phones with high speed data plans can already tether, but most carriers charge users steep fees for the service (AT&T typically charges around $30 per month). Such plans have never been available for iPhone users, and while users with jailbroken (hacked) iPhones have been able to tether for some time, it violates AT&T’s terms of service.

NetShare, which offers tethering for a one time price of $10, likely has AT&T up in arms, as it totally undermines their ability to collect fees on the service. Apple has a lengthy review process (or at least a long wait time) for each app, but it appears that this one may have somehow slipped through the cracks.