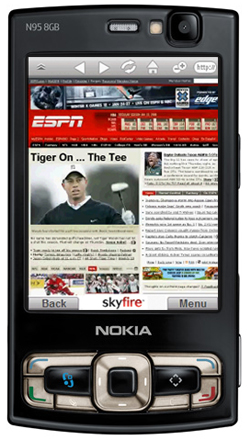 Throw out that WAP browser on your cell phone. We are quickly approaching a point where a full browser experience is available on our mobile devices. And it is not just the iPhone. A startup called Skyfire is in some respect even further along than Apple in bringing the entire Web to your phone. Its mobile browser lets you slide Web pages around and zoom in like with the mobile version of Safari. But it also supports Flash and Ajax sites. (It does this by offloading most of the heavy lifting to its servers rather than the mobile client). That means you can watch Youtube videos and go to Google Maps right in the mobile browser instead of having to download separate apps. In contrast, the iPhone’s Safari browser still does not support Flash and so to watch a a video you have to launch the separate Youtube app.

As it becomes possible to do more and more inside the mobile browser itself, it raises the question of whether that indeed is the killer app for mobile Web phones. For the most part, you still get a richer experience by downloading a separate single-purpose app to your phone. But efforts like Skyfire’s point to a future where that may no longer be necessary for all but the most sophisticated apps and games.

Skyfire launched on Windows Mobile, but as of today it is also available in a private beta for Nokia phones running Symbian’s S60 operating system. The first 200 TechCrunch readers to sign up for the beta here will get invites (enter invite code: Tcrunch).

I just tried it on a Nokia N95, and watching video in the browser looks great as long as you are connected via WiFi. As 3G networks become a reality, that should change (although I am supposedly on AT&T’s 3G network in New York City, and videos take so long to load that they are basically unwatchable at this point). And I still prefer the speed of the Safari browser overall in terms of responsiveness. But for other mobile platforms, Skyfire is going to give mobile browsers like Opera’s a run for their money. And if Apple ever actually allows another browser on the iPhone, it could add some much needed competition there as well.

The company recently raised $13 million in a series B round from Lightspeed, Matrix, and Trinity. Below is a video demo of Skyfire on Windows Mobile: