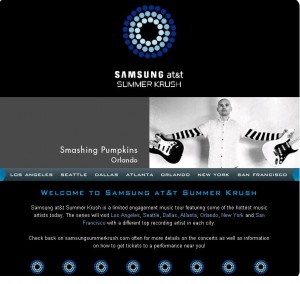 Samsung and AT&T kicked off their exclusive music tour last night with a free Mariah Carey performance in Hollywood. The Summer Krush tour presents seven one-night only private music events, with tickets only available from radio promotions, street teams and online registration. This summer’s acts include: Gavin Rossdale in Seattle, on August 7; LeAnn Rimes in Dallas, on August 13; Nelly in Atlanta, on August 19; Smashing Pumpkins in Orlando, on August 22; Nas in New York, on August 27; and Good Charlotte in San Francisco on September 16.

Along with the music, AT&T and Samsung will be have interactive booths at the shows “showcasing the music capabilities of the Samsung BlackJack II,” and prizes including a, surprise! BlackJack II.

Check out the Summer Krush site for more details about the shows.