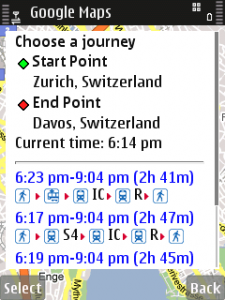 When Google announced that they’d added transit information to the Google Maps for Blackberry application, I was beyond pumped. A lingering artifact of a time when pen-and-paper was the only option, transit maps make me angry.

Now Google’s gone and freed S60 and Windows Mobile users from ever having to deal with transit maps either. With the release of version 2.2, both platforms can route directions through the public transportation systems of over 50 cities.

The update also packs in 2 extra features: star-ratings for business can provide a rough estimate of public opinion, while user-generated content on the maps.. uh.. keeps things interesting? I’ve never actually found a use for the user-generated stuff – more often than not, it’s just in my way.

To grab the latest version of Google Maps for Mobile, point your handset at google.com/gmm