Long outplayed by two Indian brothers, Hasbro finally delivers a massive counter blow to Scrabulous, one of the most loved games on Facebook. Scrabulous fans in North America will see the following message when they try to play the game:

Scrabulous is disabled for U.S. and Canadian users until further notice. If you would like to stay informed about developments in this matter, please click here.

Hasbro has long contended that Scrabulous infringes on its trademarks for Scrabble. It licenses the North American digital rights for Scrabble to Electronic Arts, which announced its own Facebook version of the game earlier this month. (RealNetworks owns the international digital rights, and is not taking as aggressive a stance against Scrabulous).

Last week, Hasbro filed suit against the owners of Scrabulous, Rajat Agarwalla and Jayant Agarwalla. The same day, EA publicly launched its officially-sanctioned Scrabble game on Facebook. (See screen shot below, which I took that day).

Hasbro and EA planned their moves very methodically and waited patiently for their chance to strike. Perhaps EA felt that it could not compete with Scrabulous other than by taking it out at the knees. Scrabulous boasts 509,505 daily active users. EA’s Scrabble Beta has 14,956 (after only five days). Now, the question is whether Scrabulous fans will boycott the official version of Scrabble on Facebook or switch over to satisfy their word lust.

Update: EA’s Scrabble app seems to be down on Facebook. Maybe they weren’t ready for the surge in traffic.

By Taking Down Scrabulous, Hasbro and Eelectronic Arts . . .
( surveys) 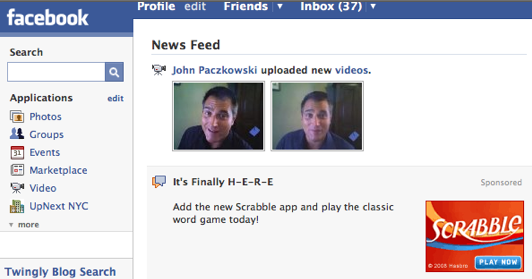