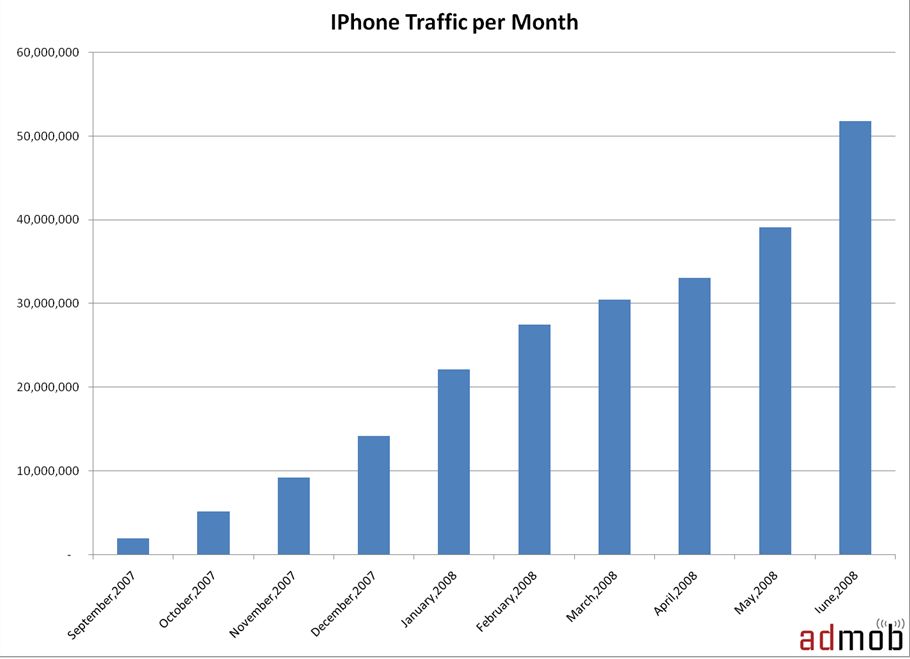 With the 3G iPhone about to go on sale tomorrow, mobile ad startup AdMob is releasing some data on its iPhone ad network. Since it launched the network back in July, 2007, AdMob has served 249 million ads to people’s first-generation iPhones. Last month alone, it served 52 million ads worldwide and 34 million in the U.S. The monthly growth those numbers is up 32 percent and 26 percent, respectively.

To put this in perspective, though, AdMob serves 3.5 billion ads each month across all models. So iPhone ads in the U.S. represent only one percent of that total.

The question is whether that growth will continue, or whether AdMob’s phone-specific ads will be superceded by regular Web ads. After all, the iPhone has a fully functioning browser that shows the same ads you see on your desktop.

One question is whether it is a better advertising vehicle than other phones. Another is what form will those ads take. Do advertisers need to create special ads tuned for the iPhone? Or can they just buy regular Web ads and assume that people will see them in the iPhone’s fully-featured browser? Silicon Alley Insider raised this question earlier in the week, noting:

. . . an iPhone’s browser loads an ad the same way a computer does — not the same way a Motorola Razr does. So if the iPhone is just loading a normal Internet ad in a custom size, there’s no real need for a special mobile ad network.

You essentially assume that simply because “regular” ads can be served, they will inherently be optimal. . . . The reality is that . . . ads designed for the web as viewed from a PC are not and will not be optimal.

Although the idea of a unified web where everything is exactly the same (including advertising) is intriguing, the reality is that all the recent advancements in digital advertising (search, behavioral, demographic, and psychographic targeting, etc…) have been about differentiation of audiences rather than amalgamation. In the context of advertising, there is significant value locked up in even subtle differences and we know from experience that the device you are browsing on is no subtle difference.

Whether regular ad networks can play that game remains to be seen. But AdMob already tunes its ads for the specific phone model that the ad is being sent to. The current set of iPhone ads, for example, take advantage of the iPhone’s large touch screen to draw those interested deeper into an ad. And they can also trigger some of the iPhone’s special features, such as launching a Google map. For instance, in the Jaguar ad below, the Google map shows nearby Jaguar dealerships.

Similarly, ads that let you make a phone call for more information or to order the item being advertised are different than most banner ads (although some of those have click-to-call features too, it stands to reason that a click-to-call ad would work better on a phone). And in fact, the company claims that the response rates of these iPhone ads are better than other mobile ads.

With the 3G iPhone coming out with new features and a whole slew of apps, AdMob needs to keep up with the changes in the device. Advertisers will flock to wherever they can get the best response rates. The more that AdMob can tune its ads to the specific location and experience of the viewer, the better the response rates should be. I will ask Hamoui how he plans on doing this at the upcoming Mobile Web Wars Roundtable that I will be hosting.