UGame, a social network for gamers, has opened in public beta. The site, which entered private beta in February, offers gamers a place to share their scores, meet other gamers, form teams and guilds, and post blogs and pictures.

The site was founded by Sam Mathews, the creator of Fnatic, a well-known gaming team. His goal with UGame was to connect gamers with likeminded people and to unite the gaming community. With a community that is currently 364 million strong (with an estimated 80 million moderate to hardcore gamers), there is clearly a sizable market.

Since the launch of their private beta, UGame has added several new features, including a “Games” section, where pages are made for different games. Each page includes general information about the game, forums, messageboards, and reviews. It has plans to expand the features of this section, and aims to be “the IMDB of games.”

Another new feature is the “Guilds” section. In this section, users can create pages for their guild or team and post standings, galleries, and statistics. Users can follow their favorite teams, receive updates, and join discussions about them. This is similar to band pages on Myspace, except for gamers.

UGame is attempting to bring together a previously segmented community of gamers, and give them a place to interact. There is a large audience for this kind of site, and they accommodate it well. UGame isn’t trying to be the next Myspace or Facebook – it just wants to be a niche site where people can go and meet likeminded people. The site is easy to navigate, and very conducive to finding interesting content and people.

Other major players (pun intended) in this space include Shawn Fanning’s Rupture (acquired by EA Games in May), Raptr (social network with a client-side app for online games), Curse (includes portals for World of WarCraft, StarCraft and Age of Conan), and GamerDNA. 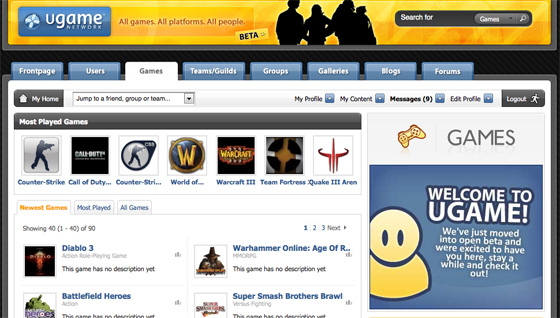