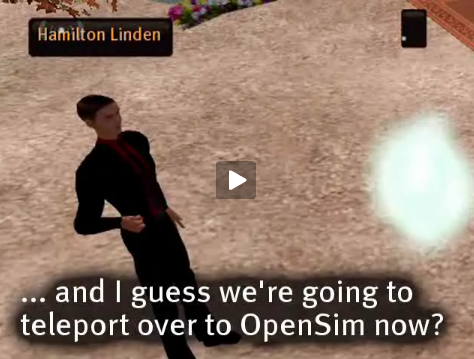 The two companies have been working together on the Open Grid Protocol to allow for interoperability between virtual worlds. In a post on the Second Life blog, Hamilton Linden explains:

An open standard for interoperability based on the Open Grid Protocol would allow users to cross freely from one world to another, just as they can go from one Web site to another on the Internet today.

Here’s a video showing the avatars “teleporting” from one world (i.e. set of computer servers) to another:

Otherwise, virtual worlds will remain isolated in their alternate universe. If you can’t link to it from the regular Web (and vice versa), it doesn’t exist. That is why virtual 3D worlds are going to come to the browser. One startup, Vivaty (which launched in public beta earlier today), is already creating these browser-based virtual environments, where each place and object is a regular URL.

These still pale in comparison to what you can do in Second Life, but they will get better. And being connected to the rest of the Web will ensure that they never have any interoperability issues. The Web will just become more 3D over time. Will Second Life join the Web, or will its legacy architecture (built when there was no other choice) prevent it from doing so?