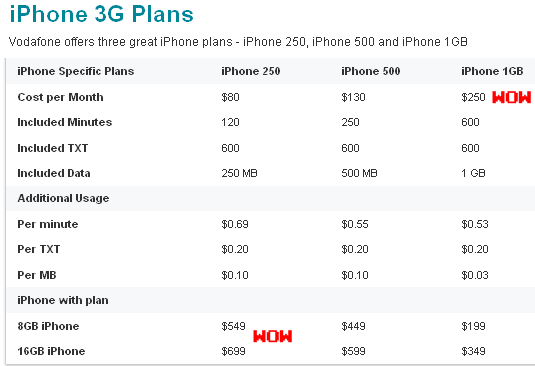 Over at CG we’ve been watching the iPhone pricing plans whiz by, from the onerous Rogers tariff to Vodafone New Zealand’s $200 per month for 1 GB data plan. A lot of folks have been complaining about these prices but in light of these international plans, including nasty plans from Europe, AT&T’s pricing isn’t that bad.

Another interesting point: all of us expecting to waltz into AT&T stores and pick up an iPhone for $199 will be sadly surprised. The $199 price is for new contract-holders only. If you’re an AT&T subscriber you’ll be paying $399 and $499 for your iPhone – about $100 less than the non-contract price. AT&T’s thinking behind this – although a bit mercenary – is clear: there’s not much else in AT&T’s line up that will bring in new customers the way Jobs’ space phone will.

UPDATE – Just to set the record straight, here are the prices straight from AT&T:

CrunchGear’s Peter Ha gets a bit more forceful in his defense of the pricing.

I’ve been hemming and hawing about doing this post since last week when AT&T revealed all the pricing info for the iPhone 3G. With the release of Vodafone NZ‘s pricing today, I can no longer keep my mouth shut. The Kiwis are paying $190 for 1GB of data, 600 minutes, and 600 texts! Not to mention the fact that if they opt for the cheapest plan ($60), they’ll have to shell out $415 (8GB) or $527 (16GB), respectively. I really want to know what you people are bitching and moaning about over AT&T’s plans? As far as I can see, it’s cheaper than every other country that’s getting the iP3G in every respect. Of course, you might be hammered if you’re ineligible for an upgrade, but you should have known this was going to happen.