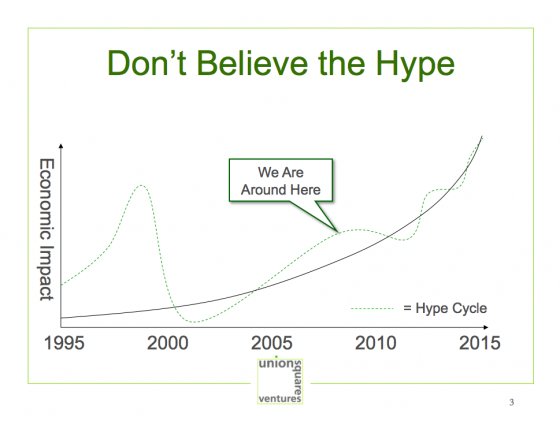 What are venture capitalists looking for? If you are a startup entrepreneur looking for funding, it’s always a good idea to know what investment themes a VC is interested and tailor your pitch to those themes. Yesterday morning, I saw presentations from three venture firms—Union Square Ventures, DFJ Gotham Ventures, and First Round Capital—at an event hosted by the Media Kitchen. Each of the presenters outlined some of the themes their venture firms are trying to ride. They all boil down to structural change in one form or another.

One common theme everyone seemed excited about is that, after years of hope and anticipation, the mobile Web finally seems within reach. The rise of the iPhone and the work on Android hold out the promise for a mobile Web that doesn’t suck,” as DFJ Gotham partner Thatcher Bell puts it. By that, he means a fully functioning mobile Web that is open to developers so that they can create the same types of experiences on cell phones that they are creating on PCs. Another common theme is the continued personalization of content, commerce, and advertising. And data-driven startups that make sense of the deluge of information and media now available to everyone are also likely to get a hearing from these VCs.

Albert Wenger, a partner at Union Square Ventures, notes that we might be a little bit ahead of ourselves in the hype cycle (see slide above), but that the impact of some of the changes we are just now seeing now on the Web will eventually catch up to the hype. The structural changes and other shifts that Union Square likes to invest in include:

Of course the Web is becoming more social, programmable, playful, and intelligent, but there are also bigger shifts occurring as the Web audience becomes more mobile and global. There is also a fundamental generational shift going on among Web users, which Wenger defines as:

The risks he worries about are:

Any Web startup that becomes popular fast has to deal with scaling issues that can derail it (see Twitter, a Union Square investment). Wenger, though, thinks that these issues will go away as cloud computing matures. Net Neutrality issues could pose a risk if ISPs decide to start blocking or discriminating against certain types of data. And the whole question of who owns the data that Web companies accumulate about users could result in some privacy backlash down the line. Startups should have answers to how they plan on handling these risks.

Despite signs of a recent slowdown in Web advertising, the VCs are still bullish about the ability of online advertising to keep taking share from other media. And as digital media becomes more personalized, so too does the advertising. Bell from DFJ Gotham sees the evolution of the way advertising is delivered (see slide below) going from undifferentiated mass media to targeting by categories, behavior, context, and finally the social graph. Here are the themes he is looking at:

He thinks we still have along way to go in terms of making the Web easy to use. For instance, Bell compares Google’s current interface to the C: prompt days of the PC before Windows. Says Bell:

This is a really good way for a search engine to get input from a human and for Google to make money. It is not the best way for a human to interact with a computer.

He argues that more intuitive Web and search interfaces, like SearchMe, are needed.

There may be an IPO drought going on right now (not a single venture-backed IPO has gone out so far in the second quarter, according to the National Venture Capital Association), but VCs are still looking for the next, next thing. 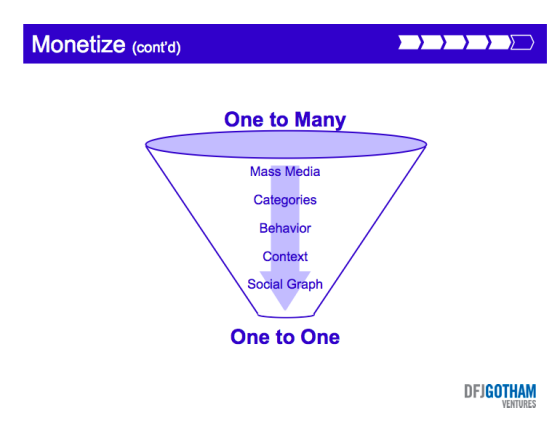 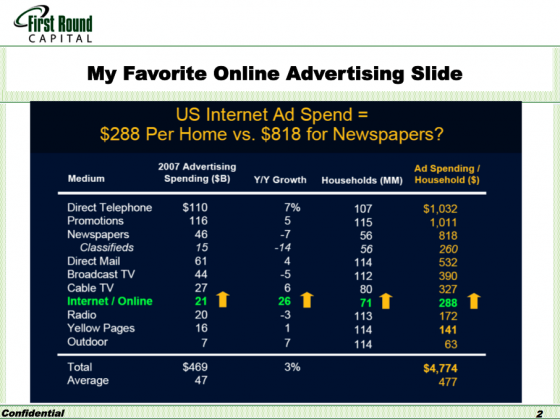